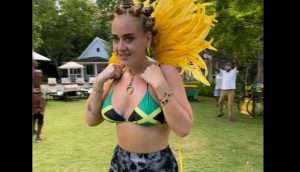 (LOOP NEWS CARIBBEAN) – Jamaicans online rose in staunch defence of British singer Adele who was savagely criticised for cultural appropriation over the weekend after she posted a picture with her hair dolled up in ‘chiney bumps’ (bantu knots) while sporting a Jamaican flag bikini top, a gold chain and carnival feathers.

The singer uploaded the picture to Instagram Sunday, penning “Happy what would be Notting Hill Carnival my beloved London”, alongside emojis of both the UK and Jamaican flag.

The reaction was immediate and fiery, especially in a time of heightened tensions stirred up by recent police shootings in the US and the Black Lives Matter movement.

Many accused the ‘Someone Like You’ singer of cultural appropriation.

One user summed up the decision succinctly with this take: “There were so many f____g steps that happened before that Adele photo made it public. An idea that took SEVERAL people’s approval. A hairstylist who was like “you sure?” A publicist who said “go for it.” I need to lie down.”

Another user added: “You took it far with the Bantu knots, when will you white girls learn to leave our s..t alone?? Just because you grew up In Tottenham does not make you entitled to appropriate our culture kmt.”

The chorus of dissent has its history in the legacy of black hairstyles being ridiculed when worn by blacks but celebrated when adopted by white people who can safely wear said hairstyles without dealing with the micro-aggression and torrent of abuse.

However, many Jamaicans defended the singer.

One user wrote: “Adele is an honorary Jamaican  she always has been idc”, while Francine Braverman was even more emphatic: “To all the ignorant non Jamaicans dragging Adele for supporting the Jamaican culture, sit down! You don’t speak for us! We are proud of Adele! Nuff respeck to her!”

Others mused about a possible reggae album from the singer.

The singer’s post was her own special celebration of the Notting Hill Carnival which has gone virtual this year because of COVID-19 concerns. The event began in 1959 as a Caribbean street festival in response to race riots the previous year where white people attacked and looted the West Indian community over two weeks.

It’s now one of the largest street festivals in the world, attracting up to 2.5 million visitors across the last weekend of August, and is one of the leading calendar events for the West Indian community in Britain.