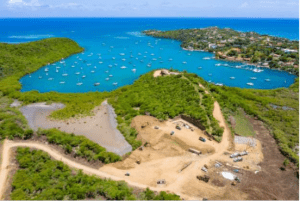 PR – Now known as the Hartman Resort Grenada, the Mt. Hartman development under the Citizenship by Investment Program has a new developer and management team, who have seized the opportunity to continue the development and enhance the area.

Chief Executive Officer of the Citizenship by Investment Program, Percival Clouden, recently updated the GIS on the project. He said it will involve a new configuration from the original development. Clouden explained that the new developers have already obtained approval and work has started, with an estimated fifty Grenadians employed in the initial stages of the project.

He noted that the new developers have given their commitment to preserve the bird sanctuary, and are now going through the process of engaging an environmental specialist to ensure that there will be no  destruction of the sanctuary.

Through the new configuration, the Hartman Resort Grenada project’s revised cost now stands at U.S. $2.9 billion, and it is projected to take ten years for the four phases of the project to be completed. One of the four phases in the construction process will be a health and wellness center that will cater to locals and visitors.

The Hartman Resort Grenada is also going to construct a marina. Clouden said Grenada’s marine industry brings in approximately $125 million to the treasury per year, and that’s an area that the Government needs to capitalize and expand on, as it is a solid base that can assist in job creation. He said the thinking going forward should be on deciding how we train and prepare Grenadians to take up these jobs when they become available.

Altogether, the CBI Program is important to the economic development of the country and its people. Clouden said that as head of the Citizenship by Investment Program his mandate is to encourage investors, and there is absolutely no doubt that that a country grows through foreign direct investment.

He said the CBI Program assists developers in providing the necessary funding through citizenship, to fund the projects, as they do not have to go to the banks. Therefore, CBI makes it easier for the development.

Clouden said it is important to note, however, that the CBI program does not provide 100 percent of the financing. Developers have to come up with 20 percent of the cost of the development, so that they have some stake in it, as the objective is to see projects completed, thus enabling permanent employment for citizens.

Clouden also said that investors do not come to reside here. They have an investment in a project, which allows them a time share, whereby they can spend several weeks at a time in Grenada, as required.

The CBI program is a win-win for all parties involved.