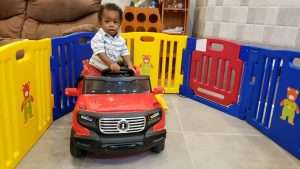 (LOOP NEWS CARIBBEAN ) – Every parent and prospective parent dreams of a healthy and happy baby who will develop on or ahead of schedule and grow to be a remarkably brilliant well-rounded child and adult.

Inherited genes play a major role in determining a child’s intelligence and personality but what if anything can we do to improve our chances of giving birth to a healthy, happy, above-average intelligence baby?

Grenadian national Mikey seems to have found the remedy, at the very least he’s found what works exponentially for his son.

Just last week he posted a video of his one-year-old son, Mikey Nathaniel Hutchinson that went viral and even resulted in him being featured in The Daily Mail UK.

In the video, the toddler could be seen playing the ball under the cup game with his father.

Baby Mikey grabbed for the correct cup each time.

His dad a journalist and talk-show host explained: “The video captured was the first time I played that game with him and I was amazed by his accuracy.”

So how did the first-time parents set the stage for their son’s advanced development?

Mikey senior told Loop Caribbean that they constantly remind themselves that everything they do is a lesson for their extremely observant son.

“We make all our interactions with him teachable ones. We read to him and speak to him as we would to someone with more understanding,” he said.

The proud father said a number of other factors contributed to his son’s advanced motor skills.

Mikey believes that a child’s development starts in the womb.

He said: “Whatever the mother is producing is fed to the baby so it is important to keep ones mental state free from stress and positive, it helps. We kept Mikey’s brain stimulated by playing him songs while in the womb,  we read to him, we spoke to him. We believe it aids in brain development tremendously.”

Since his son’s birth, Mikey said they work hard to ensure that his home environment is conducive to his son’s education and development.

“Most of his toys are educational. He has many books. We only allow him to watch one cartoon series and that is the one we think is most well-rounded and balanced, Dave and Eva. We only allow him minimal tv time average of 30 min daily and the rest of the time is spent on activities that allow him to learn through play.”

Mikey senior works at WE FM Grenada and also owns and operates a media and production company of his own.

His son’s mother Rena Nathaniel is an Instructional Design Manager.

Both parents say the biggest dream is for their son to have his heart’s desires fulfilled and for him to positively impact the lives of others.

Mikey said: “We will hand over ownership of the family business to him with the hope that he continues that legacy, if not, he is free to determine his own destiny.”

The viral video which was posted on Mikey’s Facebook page has been viewed over 43 million times since it was posted a week ago.