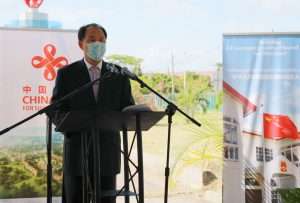 PR – On August 28, a handover ceremony of 15 greenhouses donated by the Chinese Embassy to the Grenadian farmers was held at Grenada Youth Center. H.E. Dr. Zhao Yongchen, Ambassador Extraordinary and Plenipotentiary of the People’s Republic of China to Grenada, together with Hon. Peter David, Minister for Foreign Affairs &  Labor and Hon. Yolande Bain-Horsford, Minister for Agriculture & Lands, handed over 15 sets of greenhouses to local farmers from 15 constituencies. Hon. Delma Thomas, Minister for Social Development, Housing & Community Empowerment, Hon. Kate Lewis, Minister with responsibility for Youth Development within the Ministry of Youth Development, Sports, Culture & the Arts, Hon. Tobias Clement, Leader of the Opposition in the House of Representatives, senior officials from the Grenadian Government and Chinese agriculture experts were also present at the ceremony.

In his remarks, Ambassador Zhao Yongchen said that since the resumption of the bilateral diplomatic relations in 2005, the Chinese government has extended great support to Grenada’s agricultural sector and carried out seven consecutive phases of agricultural cooperation projects, making due contribution to local agricultural development. The 15 sets of greenhouses donated this time are part of China’s assistance to the agricultural sector following the donation of a batch of agricultural machineries and two sets of large greenhouses to the Ministry of Agriculture, as well as the introduction of dragon fruits by Chinese experts. China’s assistance goes in line with the stimulus package initiated by the Grenadian government to restore agricultural production, enhance agricultural modernization and climate resilience, safeguard farmers’ livelihood, and ensure food security. The Chinese government has been extending comprehensive assistance to Grenada, covering a wide range of areas. Since the outbreak of COVID-19, the Chinese government and companies donated batches of medical supplies. China also offered assistance in sectors such as housing, social walfare, sports, culture, infrastrucutre and human resource capacity building, making contribution to Grenada’s economic and social development.

Ambassador Zhao noted that as the world’s second largest economy and biggest developing country, China not only strives for its own economic development and people’s welfare, but is also committed to making due contributions to the world economy. Today, China is a contributor to the global economy, a builder of world peace, and a defender of the international order. China firmly supports economic globalization, upholds multilateralism, opposes trade protectionism, unilateralism and bullying practices, and firmly supports countries in the world to follow their own paths, and never interferes in other countries’ internal affairs. China has always supported the just cause of Latin American and the Caribbean countries. China is willing to deepen the bilateral cooperation in various fields under the framework of “Belt and Road” initiative, and boost the economic and social development of Grenada.

In his remarks, Minster David described the handover ceremony as a strong evidence to the wise decision made by Prime Minister Dr. the Rt Hon. Keith Mitchell to resume diplomatic relations with the People’s Republic of China in 2005. Since then, the two countries have been engaging in close cooperation in various areas such as education, health, sports, housing, infrastructure, etc. China is still a developing country, but still provides a lot of assistance to Grenada.

In the time of pandemic, the Chinese central government, local governments, the Chinese Embassy in Grenada and Chinese enterprises have extended multi-level assistance for Grenada’s endeavor to fight against COVID-19, and have donated a large amount of anti-epidemic supplies such as masks, protective suits, PCR testing equipment, etc. The relation between China and Grenada is based on mutual respect. The Chinese government respects the internal mechanism and independence of Grenada and never interferes in Grenada’s internal affairs and democratic process while providing assistance. China’s assistance “teaches people to fish” and has strengthened Grenada’s independent development capabilities. For this, Minster David reiterated his sincere gratitude to the Chinese government and people.