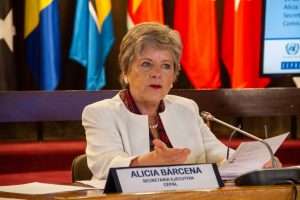 (CMC) — The Economic Commission for Latin America and the Caribbean (ECLAC) on Wednesday called on regional countries to ensure and universalise connectivity and the affordability of digital technologies in order to address the impacts of the coronavirus (COVID-19) pandemic.

This model would ensure a “digital welfare state” promotes “equality, protect the population’s economic, social and labor rights, guarantee the secure use of data, and fuel progressive structural change”.

It proposes to regional countries “a basic basket” of Information and Communications Technologies (ICTs) made up of a laptop, a smartphone, a tablet and a connection plan for households that are not connected at an annual cost of less than one per cent of their gross domestic product (GDP).

ECLAC said the report highlights the importance that digital technologies have had for the functioning of the economy and society during the crisis prompted by the coronavirus pandemic.

“Progress that was expected to take years to materialise has been made in a matter of months,” the report says. “However, access gaps affect the right to health, education and work, and can also widen structural gaps and increase socioeconomic inequalities.”

Bárcena said that while regional countries have taken measures to encourage the use of technological solutions and to ensure the continuity of telecommunications services, “the scope of these actions is limited by gaps in access to and use of these technologies and by connection speeds”.

According to the report, in 2019, 66.7 per cent of the region’s inhabitants had an Internet connection.

The remaining third had limited or no access to digital technologies due to their economic and social status, particularly their age and location, the report says.

In 12 countries of the region, it says the percentage of households in the highest income quintile (quintile V) that have an Internet connection is 81 per cent on average, while the figures for households in the first and second quintiles are 38 per cent and 53 per cent, respectively.

The report says the differences in connectivity between urban and rural areas are significant.

In the region, it says 67 per cent of urban households are connected to the Internet; while, in rural areas, only 23 per cent are.

In terms of age groups, the report says young people and older adults have less connectivity: 42 per cent of those under 25 years of age and 54 per cent of people older than 66 are not connected to the Internet.

The report says that the low degree of affordability reinforces the exclusion of lower-income households.

It says the cost of mobile and fixed broadband services for the population in the first income quintile accounts for 14 per cent and 12 per cent of their income, respectively.

This is around six times the reference threshold of two per cent of income recommended by the United Nations Broadband Commission, the report says.

It reveals that mobility data during the first months of lockdown show a world that was paralysed physically but not virtually.

“Website traffic and the use of applications for teleworking, online education or distance learning, and online shopping reveal a significant increase in the use of digital solutions,” the report says.

Between the first and second quarters of 2020, it says the use of teleworking solutions surged by 324 per cent, while distance education rose more than 60 percent.

However, the report says the use of distance learning solutions is only possible for those with an Internet connection and devices that enable access.

“The difference between the highest and lowest economic strata affects the right to education and deepens socioeconomic inequalities. To ensure inclusive and equitable education and promote learning opportunities throughout the education cycle, not only must connectivity and digital infrastructure be improved, but also the digital skills of teachers and professors, and educational content must be adapted to the digital environment,” Bárcena said.

With regard to the percentage of jobs that can be shifted over to teleworking, the report notes that this is positively linked to the level of per capita GDP and to lower degrees of labor informality.

The report says that the post-pandemic period will be characterised by new demand patterns, “based on online channels that will require efforts by countries and the private sector to deliver better services.”

Meanwhile, the report says new supply patterns will be based on flexibility, local proximity and response capacity.

“Productivity and structural change will remain central to development,” Bárcena said. “The region must move towards more diversified, homogeneous and integrated productive systems that incorporate technology at all stages in order to increase productivity, competitiveness and productive inclusion, which will lead to higher employment levels and wages.”