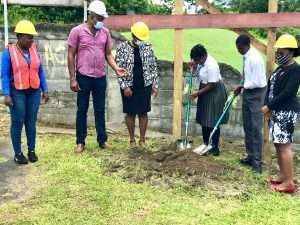 PR – Staff and students of Grenada Seventh Day Adventist Comprehensive School will soon benefit from a $7.2 million Caribbean Development Bank (CDB) funded project, which will add a multi-science block and new administrative wing, in addition to the refurbishment of existing school facilities.

After several years of waiting, staff, students, community members, other stakeholders and friends of the Grenada SDA Comprehensive School, in Mt. Rose, St. Patrick, witnessed the sod turning ceremony for this project on August 20, at the school compound. The project is part of the Grenada Education Enhancement Project (GEEP). The signed agreement between the CDB and the Government of Grenada, under the GEEP, has secured funding for nine schools to date.

Kimlyn De Coteau, Principal of the Grenada SDA Comprehensive School for the past seven years, said she is overwhelmed to see the project finally in progress.

She said, “Right now, our staff is scattered different points at the school. So, we are going to be getting administrative space. The principal’s office will also be relocated. The science lab, which is a multipurpose – one little room/multi-purpose lab at the moment – we’re going to get two additional labs. So, that will give you a wider scope for science work to be done. We would also be given room, so that a subject like Clothing and Textiles can be brought on, so we will have curriculum expansion. So, it really gives us scope for a lot of development.”

Two temporary buildings will be added to the existing school building, for the relocation of classes, during the project.

Hon. Moses, who is excited about the employment generation aspect of the project, said “We are happy for this opportunity for employment for our people, in addition to the St. Patrick Road Project that is ongoing, to the Levera Hotel Project that is just unfolding.”

The Parliamentary Representative also said five acres of land close to the school were surveyed, for the establishment of a playing field, for use by that institution and that funding is currently being sought.

Estherlyn Modeste, a Teacher at Grenada SDA Comprehensive for the past 30 years, said, “We’re thankful for the new infrastructure, firstly, because about two years ago we had the challenge with electricity. We were out of electricity for a while. So, we’ll be grateful. Secondly, we’ll have more space to accommodate more students, as well as have all the classes housed properly.”

“Some people believed that the school will never be built, but we were not of that persuasion. We had the faith and confidence that at the right time it will happen,” he said. “I must say that we’ve had a very wonderful partnership with the Government.”

Minister for Education, Human Resource Development, Religious Affairs and Information is pleased with the commencement of the project. She said despite the harsh and uncertain economic times, the Government of Grenada continues on its path of development.

“We have committed, and we continue to commit to some 75 schools that are going to be touched through refurbishment and development between now and the end of the year and into the rest of 2021,” Hon. Pierre said, speaking at the sod turning ceremony.

She noted that a number of schools currently being renovated, while the Grenada Christian Academy and the St. Andrews Anglican Primary will soon receive new schools and negotiations for the land, to be the site for the new Catholic Secondary School, are also in progress.