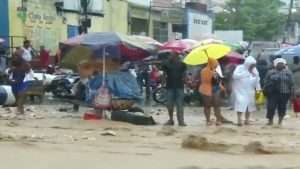 (CMC) — A 10-year-old girl is among five people killed in Haiti on Sunday as Tropical Storm Laura continues to lash sections of the French speaking Caribbean Community (Caricom) country.

The child died when a tree fell on a house in the town of Anse-à-Pitres, to the south east of the island.

According to the Directorate of Civil Protection (DPC0), the process of evacuating high-risk areas is continuing with the support of local authorities.

The Ministry of Education also announced that it is considering the possible closure of schools that also serve as emergency shelters and emergency evacuation coordinators are on standby across the country and are also tasked with overseeing measures to prevent the spread of COVID-19 in emergency shelters.

Meanwhile, gusts of wind and intense downpour from the storm have left more than a million homes without electricity supply in the Dominican Republic.

The light and power company, Distribuidora de Electricidad del Este, on Sunday confirmed that the breakdowns caused the shutdown of at least 103 circuits, affecting 578,000 customers.

The company has assured that public that work is being done to restore service to more than 90 thousand customers affected by the outage. In its update at 11:00am (local time), the Miami based National Hurricane Centre said the centre of Tropical Storm Laura was located near latitude 19.2 North, longitude 73.2 West

Laura is moving toward the west-northwest near 21 mph (33 km/h), and this general motion with some decrease in forward speed is expected over the next couple of days.

A turn toward the northwest is forecast on Wednesday and on the forecast track, the centre of Laura will move near or over Cuba tonight and Monday, and move over the south eastern Gulf of Mexico Monday night and Tuesday.

Laura is expected to move over the central and north western Gulf of Mexico Tuesday night and Wednesday.