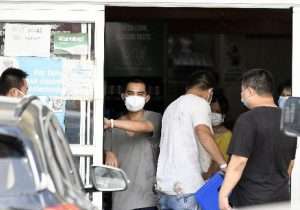 (TRINIDAD EXPRESS) – A Chinese national was killed yesterday while defending his home from a gang of cutlass-wielding bandits.

At least 15 people, including two women, sustained injuries in the fracas, the Express was told.

The commotion began around 3.45 a.m. at Happiness Supermarket, located at the corner of Eastern Main Road and Sixth Avenue, Barataria.

A group of seven Chinese nationals, who live in a room above the supermarket, were awakened by a loud noise.

Upon checking, they observed a group of people — including six men, two women, and two Venezuelan nationals — in the apartment.

The intruders were armed with knives and cutlasses.

They announced a hold-up and demanded cash and valuables.

But the Chinese nationals did not surrender to the armed assailants. Instead, the group fought back.

During the ensuing commotion, several persons were stabbed and chopped.

One of the victims managed to notify the police and officers from Morvant Police Station responded.

The officers arrived within minutes and caught the ten suspects red-handed.

One Chinese national, who remained unidentified up to press time last night, suffered serious injuries and was rushed to Eric Williams Medical Sciences Complex, Mt Hope, where he died.

Some of the suspects were also injured in the melee and were treated at hospital.

Police said the assailants did not steal anything, due to the response of the victims and the responding officers.

The local suspects live at Morvant, Laventille and Belmont.

Police are also checking the legal status of the two Venezuelans.

Investigators will focus on murder and attempted robbery.

When the Express got there, the building was cordoned off with caution tape.

Onlookers expressed shock and dismay over the incident.

“This is the world we are coming to? People have to fight with arm and leg, tooth and nail, for things that they own? Now a man is dead…protecting his own house and his own family? And the bandits alive? If you ask me the police should have dealt with them.

“How is it that these killers are alive, and a man who fought for his household is dead? People need to stop this crime nonsense. Covid-19 is among us,” the Express was told.

The killing took the murder toll for the year to date to 281.