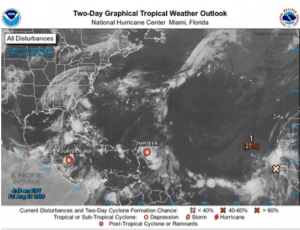 (AP) — Two newly formed tropical depressions at opposite ends of the Caribbean were expected to become tropical storms Friday, with forecasters projecting potential tracks for both that could take them toward the United States, possibly as hurricanes.

Tropical Storm Genevieve in the Pacific, meanwhile, continued to weaken as it remained offshore from Mexico’s southern Baja California peninsula while sweeping the coast with strong winds and rain that carried the threat of dangerous flooding.

The two tropical depressions formed Thursday, and tropical storm watches were posted for several islands at the eastern end of the Caribbean while a tropical storm warning was posted at the Honduras-Nicaragua border region at the western side of the sea. A hurricane watch was posted for the southern coast of Mexico’s Yucatan peninsula.

The US National Hurricane Center said Tropical Depression 13 was likely to become a tropical storm Friday and then skirt the Leeward Islands, Puerto Rico, the Dominican Republic and Cuba. The early, still uncertain track showed it potentially being near Florida by Monday as a hurricane.

Friday morning, the system was centered about 305 miles (490 kilometres) east of the northern Leeward Islands with maximum sustained winds of 35 mph (55 kph) and it was headed briskly to the west-northwest at 21 mph (33 kph).

Tropical Depression 14 was forecast to graze the Atlantic coast of Honduras, then curve northward to Mexico’s Yucatan Peninsula possibly at hurricane strength and then potentially head for the Texas or Louisiana coast by Tuesday, again possibly strengthening into a hurricane. It is expected to become a tropical storm on Friday.

Friday morning, it was centred about 30 miles (45 kilometres) north-northeast of Cabo Gracias a Dios on the Honduras-Nicaragua border, with maximum sustained winds of 35 mph (55 kph). It was headed west-northwest at 12 mph (19 kph).
Genevieve, which had been a powerful Category 4 hurricane with winds of 130 mph (215 kph) on Tuesday, had weakened to a tropical storm Thursday as it moved northwestward in the Pacific off Mexico’s Los Cabos tourist resorts. The hurricane centre said the storm was expected to continue weakening through the night, likely becoming a tropical depression by Friday evening.

The hurricane centre said Genevieve’s maximum sustained winds had dropped to 50 mph (85 kph) Friday morning, and it was centered about 130 miles (210 kilometers) west-southwest of Cabo San Lazaro. It was moving to the west-northwest at 10 mph (17 kph).

The storm knocked out power and phone service to a large part of the Los Cabos area, flooded streets in poor neighbourhoods and toppled palms in the tourist zone. High surf claimed two lives Tuesday as the storm approached the area.

Baja California Sur state officials said 15,000 foreign tourists were in the state, most in the Los Cabos region, which earlier had almost been emptied of visitors by pandemic restrictions.