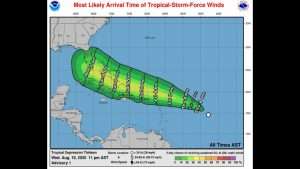 (LOOP NEWS) – A Tropical Storm Watch has been issued for some parts of the Northern Leeward Islands as the area is expected to feel the effects of Tropical Depression 13 tomorrow.

The US National Hurricane Centre (NHC) has warned persons with interests in the Virgin Islands and Puerto Rico to monitor the progress of this system as additional tropical storm watches or warnings will be required later today.

At 5 a.m. AST/EDT, the centre of Tropical Depression 13 was located over the Atlantic Ocean about 905 miles (1,455 km/h) east of the northern Leeward Islands. It’s moving toward the west-northwest near 21 mph (33 km/h) and this motion is expected to continue during the next few days, according to the NHC forecast.

Maximum sustained winds are near 35 mph (55 km/h) with higher gusts.

Gradual strengthening is forecast to take place, and the depression is expected to become Tropical Storm Laura by later today.

The depression is expected to produce one to three inches of rain with isolated maximum totals of five inches through Sunday over the northern Leeward Islands and Puerto Rico.

“The details of the long-range track and intensity forecasts are more uncertain than usual since the system could move over portions of the Greater Antilles this weekend. However, this system could bring some rainfall and wind impacts to portions of Hispaniola, Cuba, the Bahamas, and Florida this weekend and early next week,” NHC added.