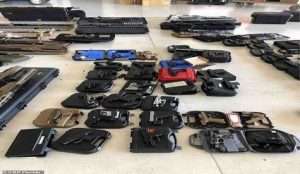 Two Venezuelan pilots — Luis Alberto Patino and Gregori Mendez — were arrested Saturday and charged with smuggling bulk cash and goods from the U.S. and illegally possessing firearms as aliens, U.S. Customs and Border Protection said in a news release. The plane and its cargo were seized, the statement said.

It was not clear why the weapons were purchased. But the arrest comes as tensions between the U.S. and Venezuela have escalated in recent months, including allegations that opponents of President Nicolás Maduro had been seeking the support of a former U.S. Green Beret to violently overthrow the socialist leader.

The Venezuelan-registered Lear jet listed as its destination the Caribbean island of St. Vincent and the Grenadines, the U.S. statement said.

But Jared Rine, a special agent with Homeland Security Investigations, said in an affidavit supporting the criminal complaint that one of the defendants said after being arrested that the aircraft’s ultimate destination was Venezuela.

“From my training and experience, I know that pilots have filed flight plans to third party countries to avoid detection of their ultimate destinations to avoid scrutiny of law enforcement authorities,” Rine wrote.

Venezuelan-registered aircraft and Venezuelan pilots have come under intense scrutiny of late for smuggling gold, cocaine and other goods as the Trump administration has intensified efforts to isolate Maduro’s government. As part of those efforts, all U.S.-registered aircraft are banned from flying to Venezuela.

The U.S. statement said customs agents were alerted about a suspicious aircraft movement at the Fort Lauderdale-Hollywood International Airport.

According to Rine’s affidavit, the aircraft was referred for a customs inspection shortly before its scheduled takeoff Saturday afternoon. When agents arrived, they found a ground crew removing some 50 boxes from the aircraft, it said.

“CBP officers observed that the aircraft was fully loaded, from the cockpit back to the lavatory, with cases and boxes of weapons, ammunition and household goods,” Rine said.

The CBP statement said a total of 82 firearms, including a Barrett .50 caliber sniper rifle and 18 rifles, plus 63,000 rounds of ammunition, were found. A firearm suppressor was also found as well as body armor, it said. The men were also transporting undeclared cash and endorsed checks worth over $20,000, CBP said.

Patino told agents that he and the co-pilot purchased the weapons on the internet and from retail shops in Florida while renting an apartment for the past three months in the nearby town of Coral Spring, CBP said.

A public defender assigned to represent Patino did not immediately respond to an email requesting comment. There was no listed attorney for Mendez.