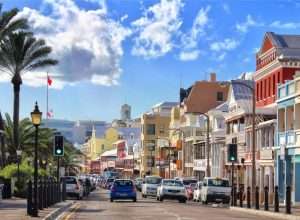 (CMC) — The US Centres for Disease Control and Protection (CDC) has lowered Bermuda’s rating as a high-risk coronavirus (COVID-19) destination, but health officials later announced four new cases of the disease, including two policemen and a tourist.

The new cases pushed the island’s total to 166, including 20 since Bermuda’s international airport reopened on July 1 after being shut on March 20. Nine people have died.

A week ago, the government complained to new US Consul General Lee Rizzuto about the CDC’s Bermuda’s rating of “Level 3 — High”, even though Rizzuto declared Bermuda “one of the safest destinations on the planet” in its fight against the coronavirus pandemic.

Rizzuto said the island’s testing regime, which Premier David Burt claims to be the most stringent in the world, for coronavirus was “effective” and that cases in Bermuda had remained at a low level.

On Monday, the CDC said it had changed Bermuda’s country classification to Alert — Level 2 and a government spokesman said “this improved status is in line with the World Health Organisation’s categorisation of Bermuda with sporadic cases”.

Prime Minister Burt added that his administration and Bermudians in general “extend a formal thank-you to the US Consul and Consulate team, Government House together with the Ministry of Health for working quickly to provide details of Bermuda’s management of the coronavirus to the appropriate agencies.

“Bermuda continues to focus on extensive testing for residents and all travellers coming to the island to reduce the spread of COVID-19,” he added.

The four news cases, including three who flew to the island from New York on JetBlue Airways, were among 1,244 results received between last Sunday and Monday. In all, more than 33,000 tests have been carried out to date.

Three of the passengers, who all had clear pre-departure tests, came in on flights over the past 10 days. One resident tested positive after they arrived at the airport last Saturday.

A total of 147 people have recovered and there are 10 active cases, all monitored by public health officials.

Late on Monday, a police spokesman said one of the officers tested positive after returning from overseas and the other may have contracted the coronavirus on the island.

“Both officers remain under mandatory quarantine and are also being closely monitored by the health authorities. Additional cleaning of facilities has taken place, with the assistance of a professional cleaning company,’ the spokesman said, adding that contact tracing for the two had started and officers who had been in contact with them had been tested.

“Out of an abundance caution, we will continue to closely monitor this situation and apprise the public as necessary, on any further developments,” the spokesman added.