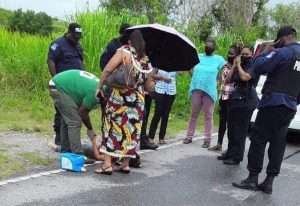 (TRINIDAD NEWSDAY) – An 18-year-old Venezuelan empanada vendor endured hours of torture, being stabbed, beaten, and raped by a group of men who left her in the bushes off the M2 Ring Road in La Romaine, but only after she pretended to be dead.

After an intensive search by police to find the teen’s attackers, a day later, police arrested one of their own colleagues in connection with the crime.

Investigators believe the policeman arrested owns the car the teen was abducted in.

The policeman ,who is also on suspension, was held near the Mucurapo Foreshore with another man believed to have been involved in the attack.

Senior police told Newsday it was a miracle the victim was found alive, given the extent and location of her injuries.

The young woman, who was stabbed several times in the neck, fingers and hands, was on her way to San Fernando to sell empanadas when she was abducted and attacked.

Bleeding from her wounds, the teen crawled out of the bushes along a dirt track until she made it to the road, where she collapsed, gasping for breath.

Police said a passing driver saw her and took her to the San Fernando General Hospital  where she had emergency surgery.

A police report said the young woman’s father had put her in a “PH” car near their Fyzabad home on Tuesday to be taken to San Fernando along with a container of empanadas.

Reports said as the car approached La Romaine, one of the two male passengers covered her face and tied her up. The driver then went to an isolated area off the road and she was assaulted and thrown out of the car.

She was also robbed of an undisclosed sum of money.

The teen is still in a serious condition under police guard at the San Fernando General Hospital.

The incident has generated an outcry on social media as users commended the police for their quick response and others describing the attack as demonic.

“This is so shameful,” one user said.

“We Trinidadians should feel ashamed. Nobody, especially outsiders, supposed to be treated in such a horrible manner.”