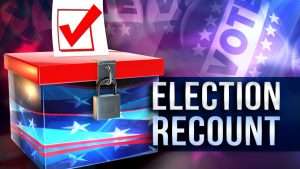 (CMC) — Six defeated candidates in Monday’s general elections have filed requests for a recount of the votes cast further delaying the official announcement of the elections by the Elections and Boundaries Commission (EBC).

On Monday night, Prime Minister Dr Keith Rowley said that his ruling People’s National Movement (PNM) had been returned to office, winning 22 of the 41 seats in the Parliament.

“So far as the results are in…but it appears that we went in with 23 seats and we would come out with 22, a majority is 21. Thank you, thank you for that support,” he said.

But while the EBC has not made any official or preliminary statement on the election results, the leader of the main opposition United National Congress (UNC) Kamla Persad Bissessar has refused to concede the election.

“I have no intention to give any concessionary speech,” she said Monday night, adding that the recount would be requested “because the numbers are so close. Only then will we claim victory or concede. That’s the way forward for us”.

This is the second consecutive general election in which attorney general Faris Al Rawi, who won the San Fernando seat, has found his victory challenged by the UNC.

The leader of the Progressive Democratic Patriots (PDP), Watson Duke, has requested a recount in the Tobago east seat he lost to the PNM’s Ayanna Webster-Roy.

The recount is due to begin 3.00 pm (local time) but EBC officials say they expect that given it is a “general” recount, the exercise could take a few days to be completed.

However, PNM campaign manager Rohan Sinanan, said that he is not perturbed at the requests for the recount and has viewed them as a delaying tactic.

“I would not take that recount so serious…because I mean I don’t know of any recount that has been successful maybe with a margin of perhaps 100. Some of these recounts they are calling for we probably won the seats in excess of 3,000 votes.

“I know what will happen in the recount, so I wouldn’t waste too much time on it. All the seats were won handsomely and I don’t want to get involved in the internal politics of other parties but what I think it is, it is to delay the inevitable,” he said.

Sinnan also repeated earlier statements made by the PNM that it would be challenging the seat won by the UNC’s Barry Padarath, whose Princes Town candidacy had been challenged on the grounds that he had signed the wrong documents on Nomination Day.