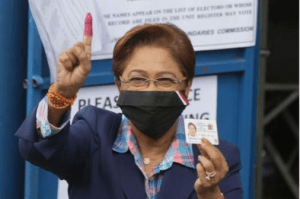 (AFP) — Trinidad and Tobago’s ruling People’s National Movement party has declared victory in a close-run general election where it lost a seat to the opposition, which has said it will contest the result.

The run-up to Monday’s ballot was dominated by the government’s handling of the coronavirus pandemic — largely seen as a success, and allegations of corruption that have embroiled several former ministers and a serving MP.

Rowley declared victory as votes were still being tallied, with the final count expected later this week.

“I have always said the people… can be trusted to do the right thing when called upon to do so,” he said in the capital Port of Spain.

But UNC candidate and former prime minister Kamla Persad-Bissessar refused to concede defeat and told reporters her party will demand recounts on three seats — the number required to take power.

Rowley was quick to thank his supporters after the polls closed, saying older people may have shied from voting because of coronavirus concerns.

“The future of Trinidad and Tobago is bright.”

The country has just under 300 registered cases according to a John Hopkins University tally and the government has received praise for its handling of the pandemic, which has boosted its approval rating.

But virus cases have increased in the lead-up to the election, with 67 people testing positive in the last two weeks.

Rowley earlier asked supporters not to converge on the party headquarters in case of victory, as is the custom, because of the virus.

Politics remains largely divided along ethnic lines in diverse Trinidad and Tobago — a majority of the People’s National Movement (PNM) supporters are of African descent with the UNC popular among those of a South Asian background.

UNC candidate Persad-Bissessar, who lost power in 2015, had urged voters not to be deterred by long queues and a process slowed by health safety measures.

“In some stations they are saying it is very slow,” Persad-Bissessar said.

“The feedback I am getting is that in some stations the turnout is very high but some people are turning back because of long lines. I just urge everyone: do your civic duty, cast your vote.”

Rowley, in power since 2015, announced on Wednesday the closure of all primary schools after several pupils were infected.

“Every election is important but I think this election is particularly important because it heralds a period… that is difficult for the country,” he said.

Many blame the new coronavirus cases on the illegal trafficking of economic migrants from neighbouring Venezuela, though no Venezuelan national has recently tested positive.

Voters elect 41 members of the House of Representatives with the winning party’s leader named prime minister.

He is battling extradition to the United States where he faces charges of racketeering and conspiracy as part of a global graft probe into world football’s governing body.

He was one of 17 single candidates from separate political parties contesting the polls alongside the two main parties. Only PNM and UNC had candidates elected however.