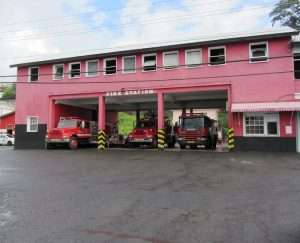 PR – Two (2) fire trucks worth an estimated 1.3 million EC dollars were handed over to the Royal Grenada Police Force.

The donation was made by the Government of Grenada during a handing over ceremony on Tuesday 11th August, 2020 at the Fire Department, Carenage, St. George’s.

The keys to the fire trucks were handed over by Prime Minister Dr. Keith Mitchell to Permanent Secretary Kim Frederick (Ministry of National Security), who in turn handed over same to Deputy Commissioner of Police Franklyn Redhead.

Witnessing the ceremony were several police officers including Assistant Commissioners of Police Michael Francois and Jessmon Prince and the newly sworn in firefighters.