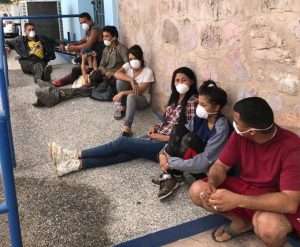 This according to a report by Human Rights NGO Amnesty International on Thursday, which questioned the Government’s decision to return approximately 165 migrants to Venezuela in the midst of the COVID-19 pandemic.

The report quotes the organization’s Caribbean researcher, Louise Tillotson, who states that the criminalization of “irregular entry,” goes against international human rights standards.

Additionally, she states that returning of these migrants to Venezuela, which is currently facing a humanitarian crisis, is a breach of international agreements to which Trinidad and Tobago is committed.

“It’s no secret that Trinidad and Tobago’s authorities criminalize irregular entry, contrary to international human rights standards. But to deport Venezuelan refugees back to the human rights and humanitarian emergency that they were fleeing, in the middle of a pandemic, is an outrageous violation of the obligations that Trinidad and Tobago has committed to under international law. No one should be forced back to a place where they are at risk of serious human rights violations,” she said.

The report questioned the “xenophobic narrative,” it said was being perpetuated by the country’s authorities. It cited a flyer posted by the Trinidad and Tobago Police Service (TTPS) which states, “Illegal Immigration can cause a new wave of COVID-19,” adding that this narrative, “Associates people fleeing Venezuela with the COVID-19 virus in a way that risks further stigmatizing and discriminating against people in need of international protection.”

It also cited requests from the Caribbean Centre for Human Rights (CCHR) in July, for trafficked Venezuelans to be aided instead of repatriated. Returning these persons, it said, would place them at a higher risk. Instead of returning these individuals to high risk circumstances, the Centre asked for a “measured solution,” to the issue of illegal immigration.

“CCHR urges the government to adhere to international human rights standards and principles to safeguard the rights of these persons, and to work with stakeholders and civil society to do so. These vulnerabilities place them at heightened risk of exploitation and human trafficking. Taking Covid-19 precautions into account, CCHR calls for a measured solution that places human rights first,” said the Centre.

“When Amnesty International visited Trinidad in January 2020, Venezuelan women who identified as trafficking survivors told researchers that police were involved in trafficking networks. This, combined with the criminalization of irregular entry into Trinidad and Tobago, made them fearful to report the perpetrators, creating a culture of impunity for human rights violation,” it said.

Additionally, it stated that such activity can drive migrants into hiding and prevent them from receiving healthcare that may benefit the entire country.

“Amnesty International believes this new threat by authorities to criminalize refugees, and those in some cases helping them, risks pushing people further underground, into hiding, and away from the health services that could protect the entire population.”