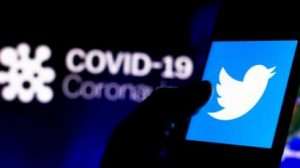 At issue in the post by the @TeamTrump account was a claim by the US president that children are “almost immune” to the novel coronavirus.
The tweet “is in violation of the Twitter rules on COVID-19 misinformation,” a spokesperson for the San Francisco-based service told AFP.

“The account owner will be required to remove the Tweet before they can Tweet again.”
A video of Trump making the claim during a Fox News interview was earlier removed from Facebook in the first action aimed at the president’s page by the leading social network.

The @TeamTrump account was posting again shortly after Twitter’s announcement, and the contested video clip appeared to have been removed.

“Silicon Valley is hopelessly biased against the president and only enforces the rules in one direction,” the campaign’s director of communications Tim Murtaugh wrote, in a reaction to the temporary ban that was retweeted by @TeamTrump.

How likely children are to contract or spread the coronavirus has become a deeply contentious issue in the US, with reopening schools essential to enabling many parents to go back to work.

Trump has been calling for both businesses and schools to reopen as part of a push to revive the US economy, whose health will play a major factor in the coming presidential election.

But a growing number of US school districts have opted against reopening classrooms come September, opting to remain online-only until the pandemic has abated.