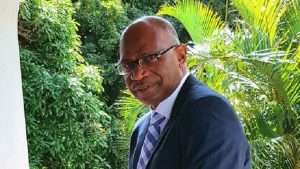 (annsvg.com) – An outpouring of grief has marred the 4th day of August as news of Jerry George’s unexpected death makes the rounds on social media.

George was a communications specialist who grew more passionate, of late, about getting the astute Caribbean citizen “information ready” on a daily basis. To that end he produced and hosted a weekday Facebook live interview styled talk-show dubbed ‘Early In The Morning With Jerry S. George.’

Apparently George died while hosting the August 4 edition which he entitled Thoughtful Tuesdays as per his regular programming. This last episode was largely carried by Beverley Sinclair a Grenadian journalist who is also the Chief Operations Officer of George’s Island Media Marketing & Communications venture.

At about 25 minutes into the show, Sinclair made the first of several prompts for George to reengage in the presentation as she made a case for a kinder Caribbean civilization. She related a story about how helping a blind man to get to his home opened her eyes to the injustices being faced by persons who endure disabilities, particularly in Grenada.

Further on as she concluded her portion of Tuesday’s show, she remarked in their usual banter, “I thank you all for listening to my story and look forward to hearing how you react to it but I don’t know where my host is, he has abandoned me. And I need him to come back at this point so we can share some of your comments, hear what you had to say and how you deal with people that you come across in your daily life – what kinds of experiences have you had…”

Sinclair eventually started sharing comments posted on the live feed, having failed to reach George. ‘Early In The Morning’ usually airs for one hour from about 6 a.m. but this last episode streamed for over 2 hours. For most of that time viewers only saw a black screen as no content was broadcast.

Sometime after 7 a.m. a Facebook post shared on Valerie Tucker-George’s account announced, “I am still in shock, came home at about 7:20 a.m. and met my husband, Jerry George on the floor dead.”

United Kingdom based Vincentian physician Alwayn Leacock was one of the first persons to join the show on Tuesday morning but told us he logged off from the live feed before it ended. He said, “I refused to accept the news because I know people can hack accounts and make fake news. So that was my first reaction fake news. Then his daughter said it was true. I can hardly speak mate. This is a great tragedy.”
JP.Schwmon.Vincy@Gmail.Com