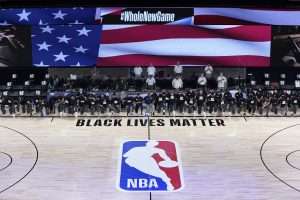 (AFP)— The NBA relaunched its coronavirus-hit season on Thursday, with players taking a knee during the US national anthem in a show of support for the Black Lives Matter movement.

Four months after the league shut down in March due to the COVID-19 pandemic, the NBA is restarting its season with 22 teams based inside a secure “bubble” at Disney World in Orlando, Florida.

The unprecedented NBA experiment began on Thursday with the Utah Jazz defeating the New Orleans Pelicans 106-104 in an empty arena at the resort’s ESPN Wide World of Sports Complex.

The first and last points of the game were scored by Utah’s Rudy Gobert — the Frenchman whose COVID-19 case triggered the NBA’s shutdown in March.

The Los Angeles Lakers and Los Angeles Clippers were due to play later Thursday in the second game of the day.

Ahead of the opening tip-off, players from the Jazz and Pelicans — wearing t-shirts emblazoned with “Black Lives Matter” — kneeled in unison as the “Star-Spangled Banner” played.

The demonstration followed weeks of soul-searching about racism and police brutality in the United States following the death of unarmed black man George Floyd during his arrest by police on May 25 in Minneapolis.

Many NBA players joined protests against the killing which swept across all 50 states in June, and the cause of social justice has loomed large ahead of the league’s restart.

Large “Black Lives Matter” slogans have been written on each court, while players are allowed to wear jerseys adorned with messages ranging from “I Can’t Breathe” to “Justice Now” and “Education Reform.”

Taking a knee has become an emblematic way of showing solidarity with anti-racism campaigners, adopted by athletes around the world in the months since Floyd’s death.

Kneeling during the US national anthem was first started by former San Francisco 49ers quarterback Colin Kaepernick in 2016.

Kaepernick used the gesture to draw attention to racial injustice but was widely vilified for his stance and has not played in the NFL since being released by San Francisco in early 2017.

While the NBA has a long-standing rule requiring players to stand for the national anthem before games, league commissioner Adam Silver said Thursday no players would be sanctioned.

“I respect our teams’ unified act of peaceful protest for social justice and under these unique circumstances will not enforce our long-standing rule requiring standing during the playing of our national anthem,” Silver said.

Thursday’s games marked a resumption of regular season play to determine the final line-up for the NBA playoffs, which start on August 17.

The tightly-controlled “bubble” setting in Orlando is designed to prevent an outbreak of COVID-19 halting play once more.

Florida has emerged as one of the worst-hit COVID-19 hotspots in the United States, with cases and fatalities skyrocketing in recent weeks.

Since Gobert’s positive case brought the league to a standstill, the US death toll from COVID 19 has soared from just 40 to more than 150,000.

NBA officials however are confident that the decision to base teams inside a single secure location will allow them to play the remainder of the season in safety.

The latest round of 344 tests of players conducted since July 20 returned zero positive cases.

Players are required to undergo regular COVID-19 testing and the ability to enter and exit the secure zone is subject to stringent regulations.

Team and NBA personnel are staying in three hotels dotted throughout the resort, with a small number of media, sponsors and inactive players also allowed in.