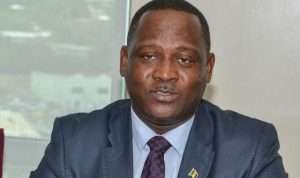 (CMC) — Former Barbados government minister, Donville Inniss will be sentenced on November 11 after he lost an appeal against his conviction on a charge of conspiracy to commit money laundering and two counts of substantive money laundering.

Inniss, who served as the minister of international business, commerce and small business in the last Democratic Labour Party (DLP) government, had been found guilty on January 16 this year in a New York court.

US District judge, Kiyo Matsumoto, threw out the appeal after Inniss challenged the sufficiency of the evidence on all three counts of conviction regarding whether he was part of a scheme to induce a bribe and whether the payments to him were corrupt or represented payments for a favourable vote.

In his judgment, the judge said both grounds essentially argue that there was insufficient evidence at trial for the jury to conclude that Inniss intended to promote a violation of the Prevention of Corruption Act of Barbados.

The court also found that there was sufficient evidence for a jury to convict him beyond a reasonable doubt, and Judge Matsumoto said “consequently, the court respectfully denies Inniss’ motion for a judgment of acquittal”.

“Although defence counsel acknowledges “there were text messages and emails . . . and clear evidence of the money transfers from Barbados to a third party in the United States and back into Donville Inniss’ bank account,” defence counsel contends that “there was no trial testimony upon which the jury could properly infer that the conduct of Donville Inniss was part of a scheme to induce a bribe, an essential element of each count,” the judge said.

He said that the government presented substantial evidence at trial that both bribe payments to Inniss were made to secure the Insurance Corporation of Barbados Ltd’s (ICBL) contracts with the Barbados Investment and Development Corporation (BIDC), a Barbadian government agency that Inniss oversaw in his position as the former minister of industry and a member of the Barbados Parliament.

The court heard that the government presented evidence that, in July 2015, Inniss met with Ingrid Innes who was at that time the chief executive officer of ICBL, to discuss the renewal of ICBL’s contracts with the BIDC.

“On or about and between June 22, 2015 and July 15, 2015, the BIDC awarded and finalised the 2015 insurance contract to ICBL and Consumers’ Guarantee Insurance (CGI), in which ICBL received a 70 per cent share and CGI received a 30 per cent share,” the judge continued.

The judge said that in August 2015, Kamante Millar, the former ICBL chief financial officer, attended a meeting with Innes and Tasker, then Senior VP of ICBL and that during the meeting,  Innes told Millar that ICBL needed to make an urgent payment in US currency to Inniss for a “referral bonus”.