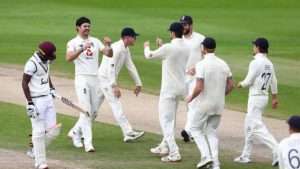 (AFP) — When the West Indies arrived in England for a three-Test series, many observers wondered if their batsmen could give a talented attack enough runs to play with.

In the end it was a task that proved beyond the tourists’ top-order during a 2-1 reverse that saw England regain the Wisden Trophy.

The Caribbean side struck first, winning the first Test at Southampton by four wickets, with Jermaine Blackwood’s 95 anchoring their impressive run-chase in the fourth innings of the match.

But it was a different story in the next two matches at Old Trafford, where a fired-up Stuart Broad, controversially omitted from the series opener, took 16 wickets — including his 500th in Tests.

Facing Broad in English conditions, where he repeatedly makes the ball move off a good length, is one of world cricket’s more challenging assignments.

But whereas the West Indies survived for 70.1 overs in the second innings of the second Test, they were all out in a mere 37.1 overs as England completed a 269-run win in Manchester on Tuesday.

Broad was reunited with new-ball partner James Anderson, England’s all-time leading wicket-taker, in the third Test and West Indies coach Phil Simmons said that gave his side a hard task.

Blackwood, Kraigg Brathwaite and Shamarh Brooks all twice reached fifty but none went on to reach three figures. In contrast, Ben Stokes and Dom Sibley scored vital hundreds for the home side.

For all England’s excellence with the ball, there were several self-inflicted wounds.

Shai Hope, who scored his only two Test hundreds against England at Headingley three years ago, gave his wicket away on Tuesday by mistiming a pull off Chris Woakes to mid-on — an attacking shot when the West Indies were batting for a draw.

Batsmen Darren Bravo and Shimron Hetmyer both declined invitations to tour for a series taking place against the backdrop of the coronavirus.

Even before COVID-19, modern schedules had greatly reduced the number of warm-up matches that enabled touring sides to adjust to local conditions.

This time around, the West Indies had to make do with a couple of intra-squad games instead.

But it is still only a year ago since West Indies captain Jason Holder, an all-rounder, made an unbeaten double century and shared a stand of 295 with wicketkeeper Shane Dowrich during a 381-run win over England in Barbados.

When West Indies were Test cricket’s dominant force in the 1970s and 1980s, many of their players were also English county regulars.

An increasing number of international matches and changes in regulations led to restrictions on overseas stars, but from next season the 18 first-class counties will again be allowed to field two per side.

“That would definitely help and give our players exposure,” said Holder of the prospect of renewed West Indian involvement in county cricket.

“But if we get more players over here it would put us in better stead.”