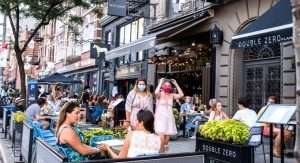 (AFP) —The United States marked a grim milestone on Wednesday when its coronavirus deaths topped 150,000 — far exceeding the toll in any other pandemic-hit nation.

Brazil is second to the US in terms of cases and fatalities, and also reported a sobering figure as it surpassed 90,000 deaths.

Nations around the globe, even those that believed they had largely curbed the disease, are seeing a rise in cases that are damaging economies and forcing protection measures that have disrupted all aspects of life.

The sacred hajj pilgrimage in Saudi Arabia has begun with some 10,000 Muslim faithful allowed, instead of the roughly 2.5 million that attended last year.

Pilgrims were brought in small batches into Mecca’s Grand Mosque, walking along paths marked on the floor, in sharp contrast to the normal sea of humanity that swirls inside its walls.

Even with efforts in place to contain the virus, COVID-19 has killed more than 661,000 people around the world and total infections are approaching 17 million.

The EU is due Thursday to update its list of countries approved for travel to the European bloc, which it reviews every two weeks. The United States was not on the list and is not expected to be included.

On Wednesday alone the country recorded 1,267 new deaths in the past 24 hours and notched more than 68,000 new daily cases, with southern and western states particularly hard-hit — especially Florida, where more than 6,300 people have died.

The bloc is expected to announce that Algeria is being removed from the list after a resurgence of coronavirus.

Meanwhile several countries in Europe have slapped restrictions on travel to and from Spain, while officials in Europe ramp up a spat over the seriousness of the current outbreak.

UK Prime Minister Boris Johnson, fresh from announcing quarantine for travelers returning from Spain, suggested the rest of Europe could be facing a second wave — despite his own country’s dismal figures.

France’s health minister hit back on Wednesday, saying his country was categorically not in a second wave.

“Clusters are emerging, we have warning signs from certain hospitals that have seen a trend of increasing admission,” Olivier Veran said, adding: “We are testing a lot more.”

Spain, one of the countries hit hardest by the pandemic, insists it is a safe destination and was critical of Britain’s blanket quarantine, which includes islands without significant outbreaks.

Brazil also wants visitors back, and on Wednesday reopened travel to foreigners arriving by plane, hoping to revive its lockdown-devastated tourism industry.

Brazil closed its air borders to non-residents on March 30, at a time when the virus was just taking hold in South America.

As a whole, Latin America’s biggest economy is facing a record contraction of 9.1 percent this year, according to the International Monetary Fund.