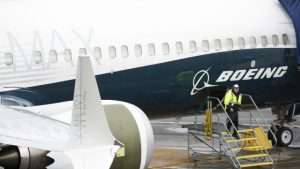 (AP) — Boeing is reporting a $2.4 billion loss for the second quarter due to the grounding of its 737 Max jet and the coronavirus pandemic, which is expected to depress airline travel even longer than previously expected.

The company said Wednesday that revenue fell 25 per cent, which is worse than analysts had expected.

“The reality is the pandemic’s impact on the aviation sector continues to be severe,” CEO David Calhoun said. “This pressure on our commercial customers means they are delaying jet purchases, slowing deliveries, deferring elective maintenance, retiring older aircraft and reducing spend — all of which affects our business and, ultimately, our bottom line.”

Calhoun said it will take “around three years” to return to 2019 passenger levels. On Tuesday, an airline industry trade group said air travel won’t recover to pre-pandemic levels until at least 2024, a year longer than its previous forecast. The International Air Transport Association cited the inability of the United States and developing countries to contain the coronavirus.

So far this year, Boeing deliveries of new airliners — a critical source of cash for the Chicago company — are down 71 per cent. Boeing recorded 59 orders but 382 cancellations, mostly for the Max. Another 323 orders, also mostly for Max planes, were removed from Boeing’s backlog because of uncertainty about the deals going through.

For Boeing, the pandemic has compounded problems that began with its 737 Max airliner, which remains grounded after two crashes killed 346 people.
The second quarter would have been worse for Boeing if not for its defense and space business, which depends on contracts with governments and has been largely insulated from the pandemic. Revenue in that business was flat with a year ago.

Still, the company has been forced to lay off thousands of workers, cut spending, suspend its dividend. It also issued $25 in new debt on the private market, which avoided the need to take coronavirus-relief money from the federal government this spring.

Calhoun said the company would further trim its plane production schedule and warned the company “will have to further assess the size of our workforce” in a message to employees.