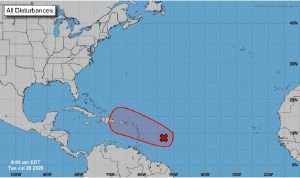 The US National Hurricane Center (NHC) in its 8 am Tropical Weather Outlook says the elongated area of low pressure located about 500 miles east of the Windward Islands is producing a wide area of showers and thunderstorms.

Although the system does not yet have a well-defined centre, data from a NOAA buoy indicate that the system is producing winds near tropical-storm-force.

An Air Force Reserve Hurricane Hunter aircraft is scheduled to investigate the system this afternoon and will provide more information about the current state of the disturbance.

Environmental conditions are expected to be conducive for additional development and a tropical depression or tropical storm is likely to form during the next couple of days.

NHC says regardless of development, locally heavy rain is likely  across portions of the Lesser Antilles beginning later today (July 28) and continuing through Wednesday, especially in the Leeward Islands.

These conditions will spread westward to the Virgin Islands and Puerto Rico Wednesday night and Thursday.

NHC says interests on these islands should continue to monitor the progress of this system and tropical storm watches or warnings could be required for portions of the area later today.

Already many islands have begun to plan for the possibility of severe weather.

Sint Maarten which has felt the brunt of hurricanes in the past, convened a meeting of the Emergency Operations Center (EOC) with the 10 Emergency Support Functions (ESF) to discuss the weather system.

Even though the EOC was not activated,  Prime Minister Silveria Jacobs wanted each ESF to give an update with respect to their status of preparations and readiness for the 2020 Atlantic hurricane season and in particular the approaching weather system.

Chair of the EOC Prime Minister Jacobs, is calling on residents to closely monitor the systems progress.

Based on information shared at the meeting, it will become clearer this afternoon (July 28) on how the weather system will develop, whether into a tropical depression or tropical storm.

Additional information will be released to the public during the latter part of the day based on the most recent analysis of the weather.

According to the Meteorological Department of Sint Maarten (MDS), the low-pressure system is forecast to begin affecting portions of the Lesser Antilles on Wednesday or Wednesday night (July 29).

Based on Monday’s information, it was difficult to assess whether there would be any type of damage, but Sint Maarten could expect heavy rains and possibly winds.

The government says the public should be prepared to take action.

The Antigua and Barbuda Meteorological Services in its 5 am bulletin says a small craft advisory goes into effect today (July 28) for the waters of Antigua and Barbuda, the rest of the Leeward Islands and the British Virgin Islands.

This will likely be converted into a warning tonight or Wednesday (July 29).

Its synopsis says fresh to strong winds associated with the development of tropical disturbance AL92 are expected to cause the threat levels at sea to rise high.

A Tropical Cyclone Alert also remains in effect for the Leeward Islands and the British Virgin Islands.

The meteorological service says locally heavy rains and gusty winds are likely across portions of the Leeward Islands on Wednesday.

A weather advisory was also issued for Dominica at 6 am by its local meteorological service.

It says a strong tropical wave with an associated broad area of low pressure over the Central Tropical Atlantic has a high chance for development.

A tropical depression or storm is likely to form over the next few days.

The system is expected to approach the island chain by Wednesday (July 29).

Dominica’s Met Service says regardless of development the weather system is expected to bring heavy rainfall, thunderstorms and gusty winds along with rough sea conditions across parts of the Lesser Antilles during today (July 28) through to Friday.

Projected rainfall amounts during the period is for 2 to 4 inches (50-100mm) with higher amounts in elevated areas.

A Flash Flood Watch or Warning may be issued for Dominica as conditions warrant on Wednesday (July 29).

Marine conditions are also expected to deteriorate from tonight into Wednesday.