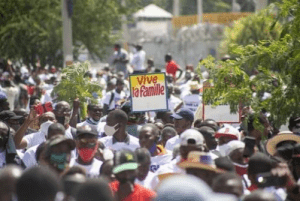 (AFP) — Several thousand members of Protestant churches demonstrated Sunday in Port-au-Prince against the country’s new criminal code, which they consider “immoral” because it penalises discrimination based on sexual orientation.

“If a pastor doesn’t want to marry two men together or two women, he will be arrested and at risk for one to three years in prison,” Pastor Wismond Jeune said, incorrectly, during the protest in the Haitian capital.

He wore a mask printed with the march’s slogan: “No to immorality, long live the family.”

The new criminal code does not change the content of the Haitian civil code, which codifies marriage and only allows the union of a man and a woman.

But the addition of the words “sexual orientation” to the list of criteria for criminal discrimination was enough to anger conservatives, who are also mistaken about the articles punishing incest and bestiality.

“The president is imposing laws on us that will lead us to perdition, laws that will destroy us like Sodom and Gomorrah were destroyed,” said Pastor Elinor Cadet, referring to the biblical cities destroyed due to the sinful nature of their residents.

Although the two pastors said they were not against homosexuality, many of the faithful — who sang and danced for hours under the blazing sun — testified to their extreme homophobia.

“We don’t accept this filth. We know there are homosexuals in the country, but we shouldn’t give them papers: they’re supposed to stay under the table,” said a 40-year-old woman, who declined to give her name.

Issued by presidential decree due to the lack of a functioning parliament, the criminal code is another source of anger for Haitians against embattled president Jovenel Moise, who was the target of many homophobic insults from Sunday’s protesters.

The new criminal code could still be repealed by the next parliament before it goes into force in two years.

Its more than 1,000 articles were drawn up over the course of the past two decades to modernise Haitian justice, which is currently still dictated according to a criminal code written in 1835, largely inspired by the Napoleonic code.