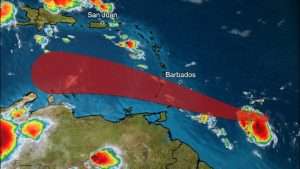 (THE WEATHER CHANNEL) – Tropical Storm Gonzalo, trying to become the first hurricane of the 2020 Atlantic hurricane season, is headed to the Windward Islands this weekend, but is expected to wither in the Caribbean Sea next week.

Gonzalo’s tiny size and the environment around it continue to pose a major forecast challenge for its future intensity. You might have to squint to pick up the size of its tropical storm-force winds shaded orange in the graphic below.

Gonzalo has been battling dry air, which is plentiful to its north and west, shown by the orange and red colors in the satellite image below.

Its circulation ingested some of this dry air early Thursday morning, putting the brakes on its intensification, at the time.

While its thunderstorms are more clustered near the center now, the convection remains rather disheveled at the moment.

Wind shear is not an overwhelming inhibiting factor for Gonzalo right now, though the latest analysis suggests some modest shear may be affecting Gonzalo.

Gonzalo is expected to encounter some modest wind shear in the eastern Caribbean Sea early next week, complicating that part of the forecast.

However, there is an ample supply of warm, deep ocean water ahead of Gonzalo, generally warmer than average for this time of year.

Furthermore, Gonzalo is a tiny storm. Small storms like this can intensify quickly in the right conditions, but they can also succumb to unfavorable conditions more quickly than a larger storm. In other words, they can strengthen and weaken much more and at a faster rate than expected.

So, the range of outcomes for the intensity forecast is higher than a typical forecast.

Gonzalo could become a hurricane and sweep through the Windward Islands, or continue struggling as a tropical storm until then.

Once in the Caribbean Sea, Gonzalo is expected to encounter a more hostile environment of dry, stable air that would suppress thunderstorms, as well as the aforementioned wind shear.

Fortunately, the track forecast is a bit more straightforward. We expect a general west-northwest track into the Windward Islands by Saturday, then into the eastern Caribbean Sea by Sunday.

Gonzalo’s small size also means its areal extent of impacts may be small, so any subtle shift in the track could mean significant changes in impact in the Windward Islands.

The southern Windward Islands should be prepared for strong winds, possibly to hurricane force, heavy rainfall and rough surf from Gonzalo Saturday.

Flash flooding and mudslides are a concern, particularly over mountainous terrain. Wind gusts may be stronger over higher terrain, as well.

Gonzalo is the earliest seventh named tropical storm on record to form in the Atlantic basin, according to Phil Klotzbach, a tropical scientist at Colorado State University. The previous record was held by Tropical Storm Gert, which developed on July 24, 2005.