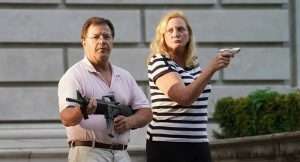 (AFP) — A US couple who became internet infamous for drawing an assault rifle and a handgun on protesters outside their Missouri mansion were charged Monday with a felony.

In a viral video, Mark McCloskey and his wife Patricia McCloskey, both lawyers, stand barefoot in their garden in St Louis, Missouri, on June 28 as anti-racism protesters marched down a private street to demonstrate in front of the mayor’s house.

McCloskey, 63, carried an assault rifle, and his wife, 61, was waving a handgun.

“Today my office filed charges against Mark and Patricia McCloskey following an incident involving peaceful, unarmed protesters on June 28th. It is illegal to wave weapons in a threatening manner at those participating in nonviolent protest,” the attorney for St Louis, Kimberly Gardner, in a statement.

She added that she was open to letting the couple participate in one of the circuit attorney’s office’s diversion programs that are “designed to reduce unnecessary involvement with the courts.”

“We must protect the right to peacefully protest, and any attempt to chill it through intimidation will not be tolerated,” Gardner said in the statement.

Missouri governor Mike Parson, a Republican, told a radio show last week he would likely pardon the McCloskeys if they were charged.

The morning after the protest, McCloskey told a local news channel he and his family were “terrified” when the protesters arrived, characterising the demonstration as a “mob.”

US President Donald Trump retweeted without comment the video of the white couple pointing a semi-automatic rifle and a handgun at the protesters, the majority of whom were black.

The clip sparked outrage online, with Gardner tweeting she was “alarmed” to see “peaceful protesters were met by guns and a violent assault.”

Faced with growing backlash, US congressman and Trump ally Matt Gaetz came to the McCloskeys’ defence on Twitter, attempting to paint them as victims of a dystopian future should Democratic presidential nominee Joe Biden win the November election.