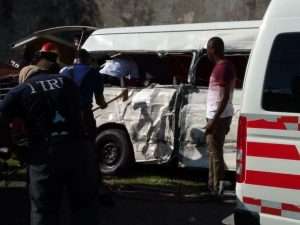 PR – Police are investigating a vehicular collision involving a passenger bus and a garbage disposal truck, along the Westerhall (St. David) main road that resulted in the death of three people on Monday 20th July, 2020.

Both Felix and Baptiste were pronounced dead at the scene while Andrew died at the General Hospital.

Autopsies are currently underway to determine the causes of deaths.