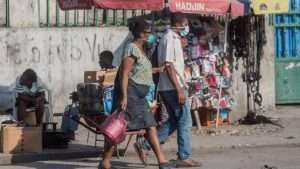 (CMC) — Haiti has recorded five deaths from the coronavirus (COVID-19) as health authorities continued to appeal to citizens to follow protocols aimed at curbing the spread of the virus.

The Ministry of Public Health said the deaths occurred in the West Department, Aribonite and in the North, bringing the total to 151 since the first case of the virus was detected in the country on March 19.

It said that the French-speaking Caribbean Community (Caricom) state had also recorded 47 new cases, bringing the total number of positive cases to 7,100, by far the highest number within the 15-member Caricom.

The ministry said as on previous occasions, males dominated the number of new cases and that there were 2,854 active cases, while there were 16,957 suspected cases being investigated.

The authorities have been urging people to wear a mask in public and reminding citizens that common symptoms of COVID-19 include cough, fever and extreme fatigue.

“Some people may also have more severe symptoms, such as difficulty breathing or pneumonia. On average, symptoms of COVID-19 usually develop five to seven days after infection. In some infrequent cases, they may appear only on the 12th day,” the authorities said.