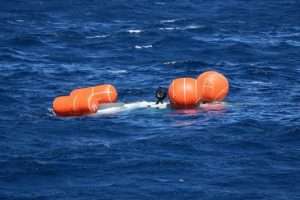 (LOOP NEWS CARIBBEAN) – Two Dutch soldiers were killed when a military helicopter carrying a crew of four, crashed into the sea north of Aruba.

This was confirmed by the Dutch Ministry of Defense.

Those who lost their lives are 34-year-old pilot Christine Martens and 33-year-old tactical coordinator Erwin Warnies.

Both soldiers were second class Lieutenant commanders at sea, the oldest category.

On July 19, the NH90 maritime combat helicopter had concluded a coastguard patrol when it plunged into the Caribbean Sea off the coast of Aruba.

The helicopter was bound for Curacao to board the Zr.Ms. Groningen ship.

The cause of the crash is not yet clear.

Director of Operations Rear Admiral Boudewijn Boots on July 20 said the helicopter was located just over 60 kilometres west of Aruba.

There are concerns as the helicopter is hanging upside down and drifting further into deeper areas.

However, four floatation devices have been attached to prevent the machine from sinking to the seabed.

Attempts are being made to retrieve the BlackBox which contains conversations made in the cockpit.

As a precaution, the NH90 fleet will remain on the ground for the time being.