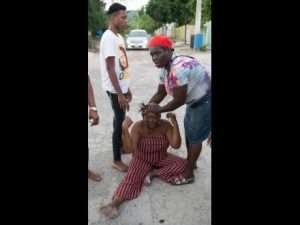 (JAMAICA GLEANER) — A 15-year-old boy reportedly perished trying to save his 17-year-old brother on Sunday, ruining what was planned to be a joyous family reunion for a matriarch celebrating her 80th birthday.

The double-drowning tragedy happened in the murky waters of the Rio Cobre after the boys and others went on a frolic after the event.

The grief at the family’s home on Camille Way in Eltham Park, St Catherine, was palpable late Sunday afternoon, with the boys’ mother and grandmother inconsolable.

The Ferguson brothers, Kashane, 17, and Rashane, 15, were part of a group that had travelled from Whitehall in St Andrew to share in the get-together.

“Lawd Jesus! Is mi bredda come from abroad and invite we to come celebrate my mother 80th birthday and mi charter a bus and dem come drown. Lawd God! A wah dis?” a distraught Winsome Beckford, the boys’ grandmother, wailed.

Sushanna Bartley, aunt of the Ferguson boys, said that she understood that four of them had gone for a swim when Kashane got into difficulties.

“Rashane jumped in to save him, and both of them drowned. This really sad,” Bartley told The Gleaner.

Kashane had just graduated from Penwood High in Olympic Gardens while Rashane was a student of Oberlin High in rural St Andrew.

Residents of the West End area of Gordon Pen, where the drowning occurred, said that the waters were deceptively deep and that others had drowned there before.

“Dem people deh is not from around here, so dem don’t understand the river,” Marcus Brown, a resident, said, almost attributing sinister motive and power to the Rio Cobre.

The drowning is at least the third in the Rio Cobre in the last three months.

Meanwhile, the Spanish Town police have confirmed that the drowning took place some time after 1 p.m.

The bodies were retrieved and transported to a funeral home.