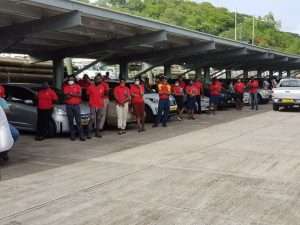 PR – On Monday, 20 July 2020, Grenlec welcomed back team members, who had been off on an unlawful strike called by the Grenada Technical and Allied Workers Union \(GTAWU) from Monday, 13 July 2020.

The Company appreciates the mediatory role of the Ministry of Labour in getting the parties to follow the dispute resolution process outlined in the Collective Bargaining Agreement to resolve the ongoing labour dispute about the scheduling of vacation from 20 April to 20 May 2020.

Significantly, Grenlec paid all team members their full salaries and maintained all their benefits during the lockdown, even though the majority of team members were not working from 26 March.

Notwithstanding that employers have a right to schedule vacation based on the needs of the business, in the interest of reaching an amicable settlement, Grenlec again offered to adjust the start of vacation to 6 May rather than 20 April.

Rejecting the Company’s offer, after nearly three months of discussions, the GTAWU made its first compromise, proposing that team members could be scheduled for vacation from 15-20 May.

The Minister for Labour recommended 15-20 May, and while grateful for the Ministry’s swift intervention, Grenlec exercised its right not to accept this recommendation.

The Company welcomes the Minister for Labour’s initiative to convene an arbitration tribunal, the next stage of the dispute resolution process.

The Company looks forward to a   speedy resolution of this matter.