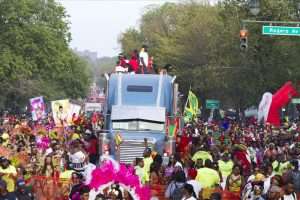 (CMC) — Several members of the New York City Council are demanding an apology from a Republican Councilman over what they termed “racist” remarks regarding the West Indian Day Carnival Parade in Brooklyn.

In a joint letter sent to Councilman Joe Borelli, the legislators said that they wanted an immediate apology for his “overtly racist attack” on the parade, described as one of the most popular in New York City.

“We are deeply disgusted by your racist call to end our West Indian Day Parade. Every single parade, no matter which part of our wonderful diversity as Americans it celebrates, requires additional police resources and disrupts local communities,” they wrote.

Borelli also wanted all activities surrounding the carnival to end as well, arguing that the parade requires a “beefed up and visible police presence” that the New York Police Department (NYPD) can no longer afford.

But in their letter, the councillors, including Haitian-born Democrat, Josue Pierre, who is also running in the 40th Council District in Brooklyn, told the Republican that he had singled out the West Indian parade, which celebrates “the rich traditions and culture of New York’s extensive West Indian community – which is mainly black – to target for elimination, fabricating a preposterous and bigoted argument that brings shame to the office you hold and our City.

“You need to apologise and consider whether you are fit to remain in office if you cannot understand and address your own bias for the greater good of our City and its residents,” the letter noted.

Pierre, who is seeking to replace his compatriot, Dr Mathieu Eugene when his term in office expires next year, told the Caribbean Media Corporation (CMC) that “as a Black Caribbean Haitian-American, I know dog whistle politics when I hear it.

“Mr Borelli is a defender of a corrupt status quo in which black and brown people are killed by police without consequence; and having lost the battle to protect violent cops in the Council, is now seeking to punish communities that demanded substantive change and to be protected and served, without being brutalised, in exchange for the taxes they pay,” he said.

“That’s shameful, and he needs to apologise,” Pierre demanded.

“It’s a danger for cops, revellers & the public. Without the enhanced police presence, made possible only by assigning officers on overtime, the city of New York can make no reasonable guarantee that revellers will be safe,” the South Shore councilman wrote in the letter.

“This danger also extends to police officers assigned to these commands during their regular shift,” Borelli wrote, adding the celebration’s violence is not confined to the vicinity of the parade but can be felt throughout the neighbourhoods and precincts surrounding the annual celebration.

“Still, these stats do not tell the full story, as they reflect people shot only in the immediate vicinity of the parade route.  A fuller picture can be painted by examining the spike in shootings throughout the affected precincts during this weekend each year,” he wrote.

But the other council members shot back in their letter to Borelli, saying “there is no debate; black Caribbean communities deserve respect and support from law enforcement, not just as taxpayers, but as human beings.

“You cite gun violence as a rationale for your not-so-veiled bigotry, but this kind of grandstanding does nothing to address the root causes of gun violence; and it is completely disingenuous to pose this as a solution.

“Council member, you do not speak for the communities that host this event nor should you pretend to know what is best for us. Have you ever had the pleasure of attending our parade to vibe to our music and enjoy our extraordinary cuisine? Do you understand its cultural significance for thousands of Caribbean New Yorkers? Why did you single out only one parade, one that is of particular significant for Caribbean New Yorkers while ignoring all others?  Can you look within yourself to see the racism and implicit bias that your words represent?

They said that there is “a very real possibility that this year’s parade will need to be postponed or cancelled because of the pandemic.

“However, when parades are able to resume, there should be no barrier for our West Indian Day Parade to continue, celebrating the rich culture and diversity we are contributing to New York’s as a Cultural Capital,” the letter added.

On Monday, the Brooklyn-based West Indian American Day Carnival Association (WIADCA), the organiser of the parade, said it was cancelling this year’s event because of the coronavirus (COVID-19) pandemic.

“In lieu of carnival parade, we will be holding solidarity march to acknowledge the barriers that be taken down and the distance we must still travel. We do not want the carnival to be a memory. Our plans are to do whatever we can –in the virtual world of COVID-19 communications – to sustain us all until we can again be physically together,” it added.