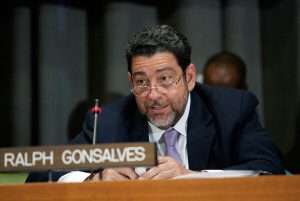 (GUYANA NEWS ROOM) –  The 15-nation Caribbean Community (CARICOM) will next week hold a special meeting on Guyana in the face of President David Granger’s refusal to concede defeat though a national vote recount, broadcast on national television, showed he lost the March 02 elections.

This is according to Prime Minister of St Vincent and CARICOM Chair Dr Ralph Gonsalves.

Guyana enjoys the benefits of free trade and visa-free travel with CARICOM countries. Additionally, thousands of Guyanese continue to benefit from the CARICOM skills certificate which allows them and their families to live and work in the region.

“Yes, CARICOM has different actions it can take. I wouldn’t want to say what the options available to CARICOM because we haven’t met as leaders… I wouldn’t be able, without a meeting of the heads to speak on that, and it would be premature for me to speak on that,” Dr Gonsalves said Thursday morning.

The Prime Minister made his comments during a radio interview with Richie B on Jamaica’s edge105.3 FM.

He said the electoral crisis in Guyana is a “blot” on Guyana and a “blot” on CARICOM, arguing that there is a “sacred assumption” that when you enter an election the people can “kick your butt.”

In his case, Dr Gonsalves, says he clears out the official residence, taking everything – down to his toothbrush – even before voting begins. And then if re-elected, he moves back in with his toothbrush and a suit to be sworn in.

Dr Gonsalve’s comments come a day after the United States (US) initiated stage one of a series of sanctions against individuals seeking to benefit from electoral fraud, restricting visas of those it deems involved or complicit in electoral fraud.

“I was in discussions with the Secretary-General yesterday [Wednesday] and we agreed that we would await a decision by the courts and then we will have a meeting earlier in the week, maybe Monday,” the Chairman said, adding that CARICOM has several actions it can take against electoral defiance.

The Chief Justice will Friday hear a case brought by a party agent of APNU, which Granger leads, seeking to block the declaration of the elections results from the figures generated from the recount.

After several failed attempts to thwart the will of the electorate, the APNU+AFC coalition mounted several legal battles to block the declaration of the results of the March 2 General and Regional elections which show a victory for the Irfaan Ali-led PPP.

A high-level CARICOM team had scrutinized a national recount of the votes and concluded definitively that it was credible enough for a declaration to be made based on those results. The results show the PPP beating APNU+AFC by more than 15,000 votes.

Dr Gonsalves has several times, over the last few months, called for the losing party – in this case, the APNU+AFC – to accept its defeat. Should this fail to happen, he noted that CARICOM has several actions it can take against Guyana.

Earlier this month Political Scientist and acting Chair of the Department of Political Science at the University of Alberta, Professor Andy Knight suggested that Guyana runs the risk of losing its membership from CARICOM.

Dr Gonsalves said, too, that the entire world is aware of what the results of the elections are, and that CARICOM has accepted that outcome since it participated in the recount. He added that the regional bloc has spoken with one voice and will continue to defend democracy in the region.

“CARICOM has spoken – and spoken with one voice. We have to defend democracy and we are on the side of the angels. It is a blot on Guyana and CARICOM. We can’t be indifferent to what is happening. We are not interfering, we are affected,” he said, adding that the headquarters of the organization is based in Guyana and that the country is a signatory to several regional treaties.

He also reminded listeners that it is not just CARICOM but other local, regional, and international observers that have called for the results to be declared based on the recount.