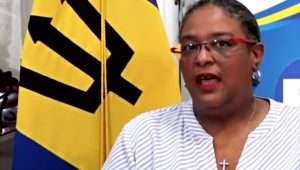 (LOOP NEWS CARIBBEAN) – While the conversation on reparation from Britain to Caribbean countries impacted by the historical Transatlantic Slave Trade may be difficult, it is necessary, according to Barbados’ Prime Minister Mia Mottley.

And she stressed that this is more than a figure, or a headline or something to be sensationalized in the media.

“We’ve been arguing this for over 20 years. And the CARICOM Reparatory Commission has basically set out a 10-point plan of the different things that they believe needs to be done starting of course with an apology,” stated the PM. She emphasized that the discussion went beyond naming sums when queried by ITV’s Good Morning Britain presenter Kate Garraway about the potential monetary figures.

And addressing the elephant in the room in the minds of some, of why now? PM Mottley cited a belief that there now were a set of people, especially youth, worldwide with a new level of consciousness helping to reset things and bringing a sensitivity to propel difficult issues like reparations for Caribbean countries.

She further added that the debt burdens were carried because these countries “want to be able to put in place a development compact for their people that was not given to their people prior to independence, and the resources were not left for us to do so in a way that the compensation took place at emancipation.”

According to PM Mottley, the CARICOM ten-point reparation plan also dealt “with things such as the psychological rehabilitation as a result of the trauma, dealing with assistance and remedying the public health crisis.

“Most people don’t even recall that the diets of slaves were heavily salted and in many instances have led to the kinds of intergenerational hypertension and diabetes and chronic non-communicable diseases that we see,” she noted.

“All of the basic things that normal governments would want to see as part, in fact, of the sustainable development goals today that the United Nations has setup,” she further added.

In addition to slave trade reparations, the July 14 ITV interview also saw the Barbados PM speak about the COVID-19 pandemic and the Barbados Government’s new Barbados Welcome Stamp campaign to entice individuals to work remotely from the island.

“The English-speaking Caribbean is perhaps one of the most highly indebted regions in the entire world with debt to GDP [Gross Domestic Product] ratios way above many other countries. And of course now that we have gone into the COVID pandemic it has become exceptionally difficult for a lot of these countries to be able to raise money on their own because of the high debt burden that they carry,” said PM Mottley.