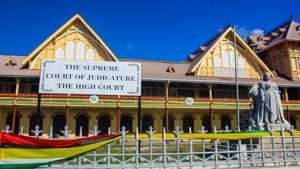 (LOOP NEWS CARIBBEAN) – The process to declare a winner of Guyana’s March 2 Regional and General Elections has hit another roadblock.

This latest snag is a result of a private citizen applying to the High Court to stop the Guyana Elections Commission (GECOM) from declaring the polls using figures obtained during the national recount.

Through her attorney, Misenga Jones has asked Chief Justice Roxane George-Wiltshire to declare that GECOM Chairman Claudette Singh “failed to act in accordance with the advice of the Chief Election Officer as mandated by Article 177(2)(b) of the Constitution of Guyana”.

She is also seeking to have the court rule that GECOM cannot declare a winner of the Presidential race without the advice of the Chief Elections Officer’s report.

Jones asked that GECOM be mandated to use the disputed election declarations, which were given by Returning Officers on March 13.

If Jones is successful, it would pave the way for President David Granger to be sworn into office for another term.

Jones’ filing came shortly before Chief Elections Officer Keith Lowenfield was due to submit his report.

The respondents in the matter are GECOM, Singh and Attorney General Basil Williams.

The matter begins at 10 am.