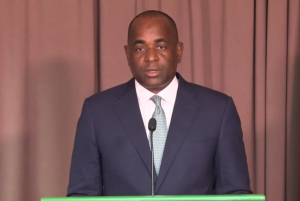 (CMC) — The Dominica Government Tuesday described as “untenable” the ongoing political situation in Guyana where the country is still awaiting the results of the disputed March 2 regional and general elections.

Prime Minister Roosevelt Skerrit, who was among five Caribbean Community (Caricom) leaders who had visited Guyana in a bid to resolve the dispute, said that it was important for the people of the country to know which government had been elected to chart the way forward.

“Guyana’s elections were held in March of this year and up to this day they have not yet been able to declare officially a winner of the elections,” said Skerrit.

He said the Caricom delegation that was headed by Barbados Prime Minister Mia Mottley, who was then Caricom chairman, thought the matter had been solved after its visit and talks with the various stakeholders.

“But certainly it has not been solved there. They have gone to court many times, the CCJ (Caribbean Court of Justice) has ruled on this matter and my understanding is that there are members of the Electoral Commission who are refusing to attend meetings and the chief elections officer is refusing to follow the law and the court order.

“Our hope and prayer is that everyone in Guyana will do what is correct, what is right and to bring to an end, the announcement of the long awaited results,” said Skerrit.

He added: “The situation is untenable. I do not want to get involved in any country’s domestic issues but just to say that it is important that this election comes to an end and the Guyanese people can go about their business knowing who their legitimate government is and that the efforts to contain COVID and to grow the economy can continue with the government of the people’s choosing”.

The Guyana Elections Commission (GECOM) is due to meet later today to receive the official results of the elections from Chief Elections Officer Keith Lowenfield.

In his last report, which was rejected by the GECOM chairman, retired justice Claudette Singh, Lowenfield said that the ruling coalition, A Partnership for National Unity (APNU) had defeated the main opposition People’s Progressive Party /Civic.