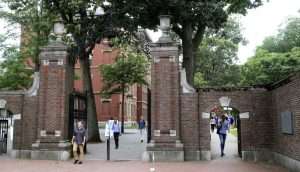 (AP) — More than 200 universities are backing a legal challenge to the Trump administration’s new restrictions on international students, arguing that the policy jeopardises students’ safety and forces schools to reconsider fall plans they have spent months preparing.

The schools have signed court briefs supporting Harvard University and the Massachusetts Institute of Technology as they sue US Immigration and Customs Enforcement in federal court in Boston. The lawsuit challenges a recently announced directive saying international students cannot stay in the US if they take all their classes online this fall.

A judge is scheduled to hear arguments in the case on Tuesday. If the judge does not suspend the rule, colleges across the US will have until Wednesday to notify ICE if they plan to be fully online this fall.

A brief filed Monday by 59 universities says the rule throws their plans into disarray with less than a month before some schools start the fall term. They challenged the policy’s legal grounds and say it forces schools across the nation to “choose between opening their campuses regardless of the public health risks, or forcing their international students to leave the country.”

The group includes all of Harvard’s companions in the Ivy League and other prestigious schools including Stanford and Duke universities. They collectively enroll more than 213,000 international students, according to the brief.

“These students are core members of our institutions,” the schools wrote. “They make valuable contributions to our classrooms, campuses and communities — contributions that have helped make American higher education the envy of the world.”

The colleges are asking the court to block the rule as quickly as possible, saying it’s already being used to turn students away. Last Wednesday, two days after the policy was announced, a DePaul University student was prevented from entering the country after arriving in San Francisco, according to the brief. Harvard has previously said one of its students from Belarus was turned away from a flight at an airport in Minsk last week.