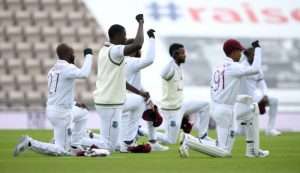 Both teams had already announced they would be wearing BLM logos on their shirts during the three-match series.

England captain Ben Stokes decided to bat after winning the toss, with rain having washed out the morning session.

The players gathered in a semi-circle in the middle at Southampton to observe a minute’s silence in memory of both the victims of COVID-19 and West Indies great Everton Weekes, who died last week at the age of 95.

West Indies players also wore a black glove on their right hand in an echo of the black power protests made famous by US athletes Tommie Smith and John Carlos after they received their gold and bronze medals following in the 200 metres at the 1968 Mexico City Olympics.

Kemar Roach bowled the first ball and Rory Burns survived a confident lbw appeal off the fourth ball of the match.

But England lost their first wicket off the 10th ball when Dom Sibley was bowled for a duck by fast bowler Shannon Gabriel playing no shot.

Rain stopped play at 1317 GMT with England one for one off three overs.