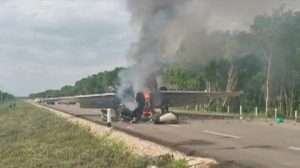 (NEW YORK POST) – A private plane carrying 860 pounds of cocaine worth nearly $4.9 million crash-landed on a Mexican highway Sunday, sending the narco-traffickers scrambling into the woods to dodge police, according to a report.

The Hawker 700, which Mexican authorities said they traced from Venezuela, came crashing down with its illicit cargo on a state highway Sunday morning in Quintana Roo in the Yucatan Peninsula, Mexican News Daily reported.

Video of the burning wreckage posted on Twitter by Alberto Capella, the province’s security minister, shows smoke billowing from the downed aircraft on the empty highway.

The crew fled into the forest before the military reached the scene shortly before 8 a.m. — but authorities said they recovered the drugs nearby when they stopped a truck that had been loaded up with the plane’s cargo.

Air Force officials told the Mexican newspaper Millenio, which originally reported the crash, that they began tracking the plane at 5 a.m. after it took off from Maracaibo, Venezuela.

They said a military T-6C Texan plane was sent to intercept the narco plane and ordered it to land before it made the forced landing on the road.

Authorities said it’s not the first time narco-traffickers were thwarted in the region — two planes carrying guns and cocaine were seized on consecutive days in January.