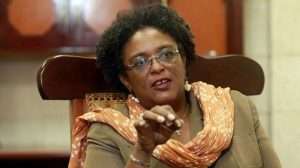 (CMC) — Barbados Prime Minister Mia Mottley says Caribbean countries affected by crimes of native genocide and African enslavement are calling for more than an apology from some European states and commercial enterprises for their role in the Atlantic slave trade and the practice of chattel slavery.

“I do not know how we can go further unless there is a reckoning first and foremost that places an apology and an acknowledgement that wrong was done, and that successive centuries saw the destruction of wealth and the destruction of people in a way that must never happen for any society, to any race in any part of this world again,” she said as she participated in a regional virtual discussion on the topic: From Apology to Action – Caricom’s Call for Reparatory Justice.

The event was organised by the Caricom Reparations Commission and Mottley, who last week was replaced as the chair of the 15-member regional integration movement, noted the “unbelievable failure of countries to first acknowledge that with an apology, and not that something wrong happened”.

She said there was need for “a written and clear apology to say, ‘we were wrong, we will not do it again’, and more importantly, we must pay recompense for what was done. That is the first step of walking the walk.”

Prime Minister Mottley said as a direct result of the aftermath of the slave trade and colonisation, the region was now one of the most highly indebted places in the world.

She said as a result, she is calling for a plan for economic rehabilitation with funding coming from Britain, France, the Netherlands and the United States to redress the imbalance, since significant sums of wealth from the region had gone to build those countries.

Mottley said that the notion of the rightness of the reparations argument had been with Caribbean governments for “a very, very long time”, maintaining that such a discussion was “not just simply about money, but it was also “about justice” and allowing the region to have the space for policy flexibility to be able to deal with its socio-economic problems.

Mottley pointed out that the extraction of centuries of wealth from the region by the colonial masters had left the Caribbean with “very, very dire social and economic circumstances”, which, she said, were being compounded by consistent attacks in the area of financial services.

She told her regional audience that if the Caribbean was to reverse its fortunes, then there had to be the capacity for foreign policy spacing at the regional, hemispheric and international levels, better access to education, healthcare, capital, land and housing.

Pro-Vice Chancellor of the University of the West Indies (UWI), Sir Hilary Beckles, who is also chairman of the Caricom Reparations Commission, used the occasion to call for a summit on reparations as phase two of the Independence process, to discuss debt repayment, conduct dialogue among regional governments, former colonisers, the private sector and civil society.

He said the “reparation summit” could thrash out how England and Europe how they would honour the debt owed to the Caribbean.

“This is the age when the crimes and their legacies and their continuing harm are being recognised. This is a moment where the pain and suffering of communities that have descended from the enslaved and the indentured are calling for justice, fairness, and dignity within the context of the continuing harm that is a part of our societies,” said Sir Hilary.

He said the “colonial mess” that the region inherited from Britain and Europe remained visible in every aspect of Caribbean life, adding that they deliberately and strategically chose to walk away and left the mess to the leadership of Caribbean governments and civil society.

Sir Hilary told the panel that billions have been spent by regional governments over the years to correct the “mess” created in the areas of education and health, adding that the region was also suffering the harm of British policy in the manufacturing sector.

“This is a debt to development. As a consequence, the Caribbean Reparations Commission is calling for a reparations summit in much the same way that the region met with the European governments to discuss independence, this is phase two of the independence process,” he said, adding the first day of the summit would be a conversation between the governments and day two would involve conversations between the private sectors of the two regions.

“The time has come now to move to that summit with these major corporations to discuss their contribution to a development plan for the Caribbean. Day three will be for civil society and individuals,” said Sir Hilary.

He did not say how soon such a summit could be called, but he noted that the region made a similar call some three years ago for a formal dialogue with leaders of Europe but the response was “not positive”.

“Apologies are not enough. Apologies are precursors for reparations. Apologies are signals of an intent to participate in a reparatory process. Apologies are stage one of an effort that says we acknowledge the harm we have caused and we are prepared to enter phase two, which is a discussion and negotiation about how to repair that harm and suffering that continues to be the legacy in the Caribbean today,” said Sir Hilary.