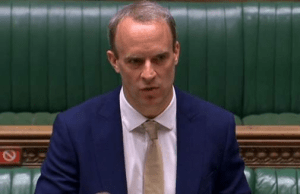 (AFP) — Britain will on Monday name the first individuals to be sanctioned under a new regime targeting people who violate human rights, with Russians and Saudis reportedly on the list.

Foreign Secretary Dominic Raab will set out the new sanctions powers in parliament and reveal a list of individuals who will immediately be subject to UK asset and visa bans.

“From today, the UK will have new powers to stop those involved in serious human rights abuses and violations from entering the UK, channelling money through our banks and profiting from our economy,” Raab said in a statement.

“This is a clear example of how the UK will help to lead the world in standing up for human rights.

“We will not let those who seek to inflict pain and destroy the lives of innocent victims benefit from what the UK has to offer.”

The Foreign Office declined to say in advance who would be on the list.

But the Financial Times said it is expected to include people believed by Britain to be implicated in the deaths of Russian lawyer Sergei Magnitsky and Saudi journalist Jamal Khashoggi.

Magnitsky was arrested after detailing an alleged large-scale tax fraud by Russian officials. He died in jail in 2009.

Khashoggi was a Saudi insider-turned-critic who was killed inside the Saudi consulate in Istanbul in 2018.

Five people were sentenced to death for his killing in Saudi Arabia last year, but 20 more, including two former aides to Crown Prince Mohammed bin Salman, are currently on trial in Turkey.

The new sanctions regime, set up under a 2018 British law, will also target figures from North Korea but not China, the FT and the BBC reported.

The Foreign Office said: “Future targets of the regime may include those who commit unlawful killings perpetrated against journalists and media workers, or activity motivated on the grounds of religion or belief.”

Overall, the regime could apply to those who “facilitate, incite, promote, or support these violations/abuses, as well as those who financially profit from human rights violations and abuses”.