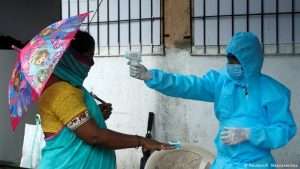 The surge has forced some cities to tighten their anti-virus measures — including the eastern metropolis of Kolkata, which halted flights from other major Indian cities on Monday. It has set up dozens of containment zones in recent days.

A new lockdown was imposed on the capital of southern Kerala state, Thiruvananthapuram, with public transport shut and only pharmacies allowed to open.

The clampdown came after hundreds of new cases were reported across the state, which had been praised for its action to curtail the pandemic. It passed a law on Sunday making face masks and social distancing compulsory for the next 12 months.

While the United States and Brazil have the highest number of cases worldwide, India’s tally is expected to keep rising for several more weeks. Experts predict there will be one million cases by the end of July.

The first patients were admitted to a sprawling temporary hospital in Delhi on Sunday, and doctors and nurses are being drafted in to help with an expected deluge of cases.

The medical team can cope “even if it reaches its peak capacity,” said Vivek Kumar Pandey, a spokesman for the military force running the 10,000-bed complex.

India has registered nearly 20,000 deaths from the virus, a much lower number than many other badly hit countries.

Though international flights remain suspended, the government has sought to ease a nationwide lockdown in a bid to counter the hit taken by the economy since it started in March.

A number of national monuments opened Monday, including the Red Fort and Humayun’s Tomb in Delhi.

But the four century old Taj Mahal, one of the world’s biggest tourist attractions, remained closed because of infections in the region.

Companies that have reopened in recent weeks are facing pressure to take action over rising cases among workers.

Unions have demanded that the Bajaj motorbike company halt production at a giant plant in Maharashtra state, after more than 250 workers there tested positive for the coronavirus.