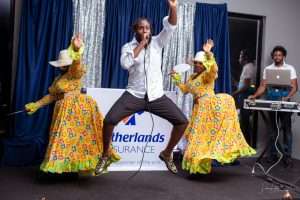 PR – Due to the COVID-19 pandemic and the resulting need for physical distancing and isolation, many institutions, businesses and professions along with their consumers, have had to adapt to online platforms as the ‘new normal’ for doing business. During this time, Netherlands Insurance has continued its support for the arts in its many forms across Grenada by shifting financial support to a number of innovative virtual programmes directed to students, families and the general population.

Some of these programmes include ‘Let’z Keep Greenz’ Music Alive’, Upstage, Conception Sundays and most recently the Spicemas Virtual Carnival City.

Let’z Keep Greenz’ Music Alive is a three part online series that showcased a number of Grenada’s vocal artists and musicians. The series which first aired on 10 May allowed fans to enjoy entertainment from their favourite artists while at home and to learn more about the artists’ backgrounds. By popular demand, this series was brought back for another trilogy now called ‘Greenz’ Music Is Alive’ where Netherlands Insurance has once again committed to being the title sponsor of the programme. The next episodes are due to air on Sundays 12th and 26 July at 2pm. To view ‘Greenz Music is Alive’ visit: facebook.com/Sabrina473

The company is also title sponsor for ‘Upstage TV Show’, a weekly, one hour virtual show featuring local entertainers in friendly battle of their original songs. The first show of the 8-week season aired on Saturday 20th June and has been a huge hit thus far. Upstage will culminate on 8th August 2020. Follow and view Upstage TV show every Saturday with reruns on Wednesday: https://www.facebook.com/upstagetvshow/

Conception Sundays, hosted by Conception Dance Theatre is virtual programme coordinated by the dance company for its enrolled students of all ages and their families. Conception Sundays was born from the need to connect with and keep students engaged while schools remain closed. The programme focuses on overall wellness and various ways students and their families can improve while at home. Some of their weekly initiatives include dance fitness and other fitness regimens; partnerships for sessions on topics such as vision and the impact of digital devices; compassionate listening and many more areas of interest. The dance company is currently exploring ways to expand their programme so it can benefit the wider population.

While Grenada will not be able to celebrate its carnival season in its usual way, the Spicemas Corporation has partnered with a number of stakeholders to host a virtual Carnival Extravaganza. Netherlands Insurance, historic sponsor of Carnival City specifically, and Spicemas, in general embraced the opportunity to bring this virtual experience to the many fans of this much-anticipated, weekly pre-carnival event. Virtual Carnival City showcases various elements of Spicemas including soca, pan, and Mas in a professionally produced show. Carnival City 2020 will be held from June 25th to July 30th and can be viewed live every Thursday on the Spicemas Corporations’ Facebook page: https://www.facebook.com/smcgrenada/

Commenting on Netherlands Insurance’s decision to continue its support for the arts, spokesperson Melissa de Allie,  said, “We recognise the huge impact that the current social climate is having on our country and in particular the entertainment industry that plays a significant part in the development of the arts and our culture. Through our sponsorships of these programmes, we were able to engage music producers, sound engineers, DJs and many others employed in the entertainment industry. We are truly honoured to be able to contribute in such a meaningful way to the growth of the entertainment industry and the empowerment of the individuals it employs.