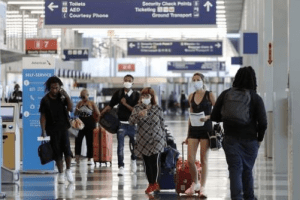 (AP) — Federal officials said Thursday that airlines should consider limiting capacity on planes to promote social distancing, but they are not considering making the airlines do it.

The officials also recommended — but did not move to require — that travellers wear face coverings in airports and on planes. All leading US airlines now require passengers to wear masks, but regulators have refused a request by the airlines to make it a federal rule.

The Transportation, Homeland Security, and Health and Human Services departments made those and other recommendations in a report containing guidelines for reducing the risk of spreading the new coronavirus by air travel.

The agencies said airlines and airports should take steps to increase social distancing, clean surfaces touched by passengers, and ask passengers about their health to discourage people who may be ill from travelling.

“This document provides clear guidance to airlines and airports to protect the travelling public, and we encourage people to pay attention to it,” said Transportation Secretary Elaine Chao.

Fourteen aviation and business organisations including the largest airline trade group, Airlines for America, said the guidelines could help the United States negotiate an end to international travel bans. Because of the high COVID-19 infection rates in the US, the European Union this week excluded Americans from people who will be able to travel freely to most of Europe.

The issue of limiting capacity on planes gained new urgency this week when American Airlines joined United Airlines in trying to fill every seat on every flight. The move was criticised by the government’s top expert on infectious diseases, Dr Anthony Fauci, and Dr Robert Redfield, director of the Centers for Disease Control and Prevention.

“I think in the confines of an airplane that (lack of social distancing) becomes even more problematic,” Fauci said.

Other airlines including Delta, Southwest and JetBlue say they are temporarily leaving one-third or more seats empty to create more space between passengers.

American and United defend their approach of fully booking flights by saying that social distancing is impossible on a plane — even if middle seats are empty, passengers will still be less than six feet apart.

“What makes an airplane safe is all the cleaning that we’re doing … the fact that we require masks, and the fact we are re-filtering the air through HEPA-grade (high efficiency) air filters every two or three minutes,” United CEO Scott Kirby told The Associated Press earlier this week.

The Federal Aviation Administration said Friday’s report is its latest guidance on the issue, and that it is not considering requiring that airlines limit capacity on flights.

The FAA has also resisted calls to make mask-wearing a federal requirement. Airlines and their labour unions believe the FAA’s stamp would make passengers more likely to comply. Airlines have banned some passengers for not wearing a mask, and in one case called the police to remove a violator from a plane.

FAA Administrator Stephen Dickson has said it is a public-health matter best left to the CDC.

The report was chilly toward an airline industry request that the Transportation Security Administration screen passengers for fever, one symptom of COVID-19. The report said temperature screening alone is unreliable because it doesn’t detect people who may be infected but don’t show symptoms or use medicine to reduce a fever.