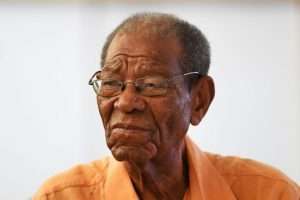 Fondly recalling him as one of “The Three Ws”, along with Frank Worrell and Clyde Walcott, Dr. Mitchell said Sir Everton’s prowess with the bat will be remembered for a long time.

Dr. Mitchell said, “Sir Everton was a prolific batsman. His excellent track record speaks volumes about the talent of this iconic figure. Despite his legendary status, he was such an approachable and easygoing person who was always ready to give advice to younger players. I personally had the benefit of his experience and advice when I studied in Barbados.”

Recalling his short stint with the Empire Cricket Team in Barbados, Dr. Mitchell said, “Sir Everton was the manager/coach at the time and I distinctly remember the genuine way in which he helped us to develop. Many years later, when I first became Prime Minister and was invited to do a few sessions on cricket in Barbados, Sir Everton was always present. We had many conversations about the supremacy of West Indies cricket and how we longed for it to return to that pinnacle.”

Cricket statistics show that Sir Everton scored closed to 4,500 runs in 48 tests. He is on record as the only cricketer to make centuries in five consecutive test innings.

Dr. Mitchell said, “He was admirably talented on the field, but remained so humble and it was this particular trait that made him so well loved and respected. He will be missed. We have certainly lost one of our cricket greats, but he has left us a legacy that is worthy of admiration and aspiration as we hope to see West Indies rise again.”