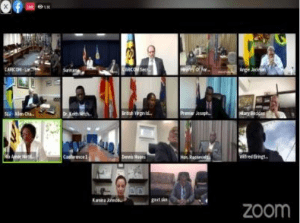 (CMC) — Caribbean Community (Caricom) leaders met virtually today to discuss the impact of the coronavirus (COVID-19) on their socio-economic future and the plight of the regional transportation with the decision to liquidate the financially strapped regional airline, LIAT.

The meeting allowed for the outgoing chair, Barbados Prime Minister Mia Mottley, to hand over the stewardship of the 15-member regional integration grouping for the next six months to St Vincent and the Grenadines Prime Minister Dr Ralph Gonsalves.

The summit was originally due to have taken place in Kingstown but due to the pandemic, it was held virtually. The leaders have scheduled another meeting later for September, where they will be expected to be physically present.

The airline owes its staff an estimated EC$94 million (One EC dollar=US$0.37 cents) in severance and holiday payment, which it is unable to pay, but Browne has said that his administration is prepared to invest an estimated EC$20 million towards the recapitalisation of a “new LIAT”.

In his address, Gonsalves, who apart from having lead responsibility for transportation within the Quasi Caricom Cabinet, is also the chair of the shareholder governments of the airline, said he had already held talks with representatives of several airlines wishing to do business in the region.

Gonsalves said the situation of regional transportation is in the hands of the leaders “to solve,” adding “as chair of the transportation portfolio…I have already been in touch with several airlines, the principal ones being CAL (Caribbean Airlines), Inter-Caribbean, One Caribbean and SVG Air”.

“I believe that we are going to be able to provide in a very short time a sufficiency of regional transport for the sub-region to serve ourselves safely, reliably, sustainably and reasonably priced,” Gonsalves said, stressing “I want to give that assurance to the people of the Caribbean Community.”

Mottley, whose country, Barbados, controlled the largest share in LIAT, said the decision to liquate the airline was a difficult one, noting “but the reality is that LIAT has been for us a critical part of our history, it has allowed Caribbean people to move, but there is also a time when those instruments that served us well in the past may not be the right instruments for us going forward”.

She told the summit that the board of directors because of the “heavy debt” of the airline, “had been carrying, not now, but for many, many years, have indicated to us that it is no longer possible to trade as LIAT (1974) Limited and in truth and in fact, the company is effectively insolvent and that it needs liquidation”.

“They would have done so conscious of the fact that unless you liquidate an insolvent company, directors will be guilty of fraudulent trading and to that extent as shareholder governments we have had to respond simply because to do otherwise would mean providing a level of funding that we simply do not have at this time in the affairs of our community.”

Mottley told the summit that “our commitment remains to safe, reliable, affordable travel within the Eastern Caribbean,” adding that a report prepared by the CARICOM Secretariat had shown that as many as 38 airlines flying within Caricom, nine of which “come from outside.”

“I am happy to report as chair of the Community and as Prime Minister of Barbados …that since announcements were being made earlier this week about LIAT’s demise, six airlines have come forward offering to fill the space.”

She said they were SVG Air and One Caribbean out of St Vincent and the Grenadines, the Trinidad-based CAL, the Turks and Caicos-based Inter-Caribbean, the US-based Silver “which we have asked to meet with us over the course of the next few days,” and the French-based Air Antilles.

“We are satisfied that these six airlines can more than fill the immediate gap particularly given the reduced travel within COVID. Having said that, I hope that we will be able to work with them and other private sector players who have also expressed an interest to being able to seeing how they can work either on their own or with some of the existing players in order to be able to fill the gap.”