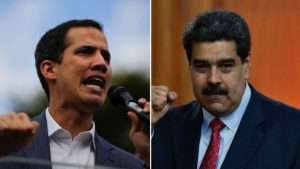 (AFP) — A judge in London said Thursday the British government had “unequivocally recognised” opposition leader Juan Guaido as Venezuela’s president, in a battle over gold bullion held at the Bank of England.

The case was brought by the Banco Central de Venezuela to release US$1 billion of gold reserves to help fund the cash-strapped country’s response to the coronavirus outbreak.

The Bank of England said it was unable to act on instructions because it was “caught in the middle” of competing claims for the presidency after disputed elections in 2018.

Commercial Court judge Nigel Teare, sitting at the High Court of England and Wales, was asked to rule on who was authorised to make the demand — Guaido or Maduro.

Teare added that it was impossible to recognise both men as president.

Guaido has refused to accept the results of the 2018 elections, calling them flawed, and insists that he is interim president pending a fresh vote.

Some 60 countries have since recognised him as Venezuela’s true leader, including the United States, which has imposed sanctions on Maduro and his inner circle.

Maduro succeeded Hugo Chavez after his death in 2013. He has ruled with an iron first but presided over the economic collapse of the oil-rich country.

Sarosh Zaiwalla, representing the Maduro-appointed BCV, said his clients would apply for an appeal.

They considered the judgement “entirely ignores the reality of the situation on the ground,” Zaiwalla said.

“Mr Maduro’s government is in complete control of Venezuela and its administrative institutions, and only it can ensure the distribution of the humanitarian relief and medical supplies needed to combat the coronavirus pandemic,” he said.

He added: “This outcome will now delay matters further, to the detriment of the Venezuelan people, whose lives are at risk.”