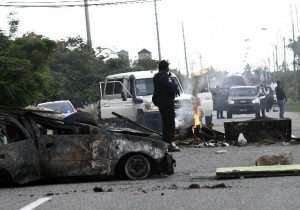 Young was speaking at his ministry’s office in Port of Spain during a news conference called as a result of fiery protests throughout the capital city from early yesterday.

He said he had received reports about people being recruited by “criminal elements” to perform ­orchestrated acts, including blocking roads, confronting police officers and even shooting at them.

“I understand peaceful protest and people being emotionally upset about the incident that took place on Saturday, but it has become very obvious very quickly that many of these incidents that are not peaceful are being stirred by the criminal elements in our ­society.

“We are getting reports on the ground of people being paid to create disturbance. So who is it stands to gain by disrupting the peace and quiet in the city of Port of Spain? There are ways to voice your concerns, we in the Government respect that and welcome it but once persons step over the line… Do not be used by the criminal elements,” Young said.

He did not identify any of the “criminal elements” he was referring to, but said not all criminal elements were called gangsters. He said most of the protest actions were “carefully preplanned disturbances”, and noted that the Defence Force had been called in to lend support to the T&T Police Service.

Young also called for peace. “The TTPS has the support of the Defence Force and they will not hesitate to do all that is in their power to keep the peace. I am appealing as a law-abiding citizen, as a person who cares about Trinidad and Tobago, to refrain from those who have criminal intent to disrupt and disturb the peace. Do not ­allow yourselves to be encouraged and get your messages crossed,” he said.

He said there were two current investigations into the incident where three men were shot and killed by police on Saturday.

These investigations are being conducted by the TTPS and by the Police Complaints Authority.

Young said he had viewed CCTV footage from the incident which claimed the lives of Joel Jacob, Noel Diamond and Israel Clinton in Morvant on Saturday, and he called on citizens to wait for the enquiries from the two organisations to be completed.

“At the end of the day that is what us law-abiding citizens want. It is not for us to play judge or jury or for us to decide who was right or who was wrong in these situations.

“I am asking persons to be careful, be vigilant and do not take unnecessary risks. This is being dealt with. There is absolutely no need for panic,” he said.